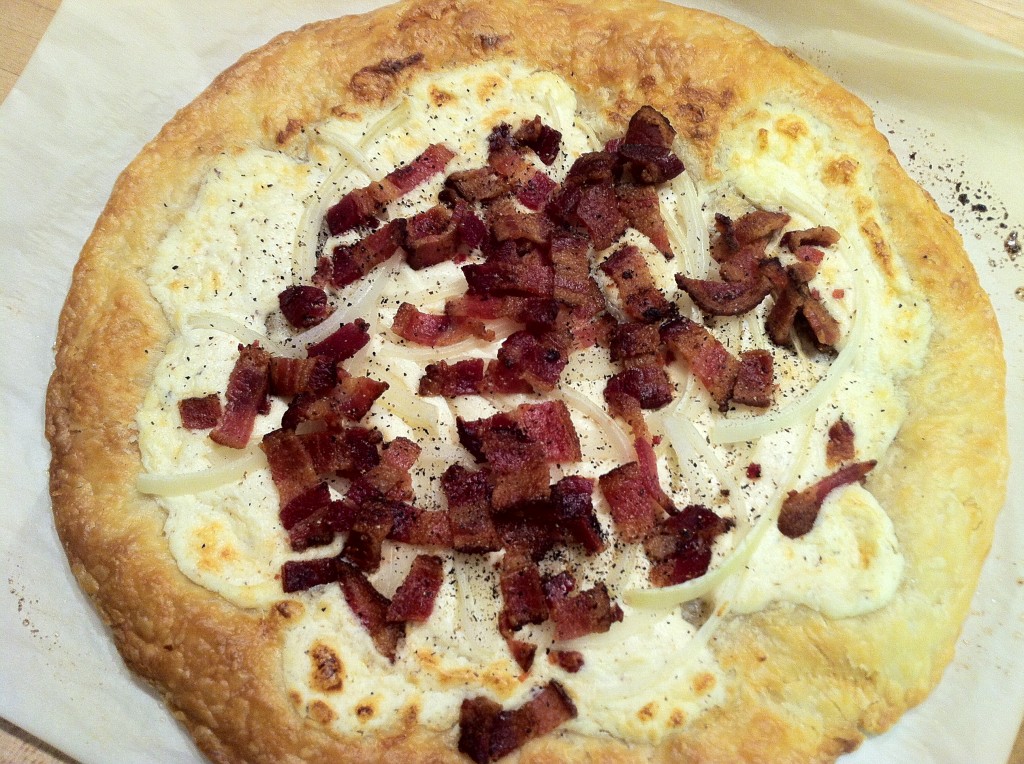 I had the phone in my hand, the number for our local, Chinese-food delivery restaurant glowing on the screen of my iPhone as I stood in front of my iPad, set before me on the counter, displaying the recipe for tonight’s dinner…Tart Flambé.  My finger hovered for a minute over the “call” button…

Let me hit “rewind” on today…actually, let’s go back to yesterday.  The girls and I were up at the barn, taking care of the horses…it was wet & cold.  Mallory, usually the “Energizer Bunny” was a bit mellow.  Of course, when questioned, the reply was “I’m fine” {as she curled up in the backseat of our pick-up truck…“I just need to shut my eyes for 10 minutes”}.  Well 10 minutes turned into an hour, on the ride home, followed by a hot shower and a two-hour nap before dinner.  Sickness was confirmed…

What I didn’t expect was that Mallory & I both woke this morning with fevers and sore throats!  No, no, no…this cannot be happening the week before Christmas!  I have too much to do!  But alas, life has other plans…we have strep throat!  The good news is that, after a solid 24 hours on the antibiotics, we should be feeling much better.  But tonight, not so much…hence, the first paragraph of this post.

Well, you have probably surmised, from this post’s first photo, that I forged on to make dinner as planned.  I simply could not feed my sick child take-out food no matter how “ick” I felt.  But, be prepared, modifications/adaptations to the original recipes abound!

First, heat an oven to 500° with a pizza stone positioned on the center rack {the stone should heat/cook for one hour prior to use}.

Next, cook the bacon:

Then chop the bacon & set aside:

Thinly slice half of a large yellow onion and set aside.

Next, in a small mixing bowl, prepare the cheese mixture:

Mix all of the above and set aside.

There was no way in hell I was making tart dough from scratch tonight.  I ALWAYS keep prepared dough in the freezer {for emergencies}…Tonight I used one of my favorites…French Picnic Dough…an organic, frozen pastry dough available at Whole Foods.

Remove dough circles from freezer.  Place on baking sheet lined with parchment paper and let stand for 10 minutes.  Spread ½ of the cheese mixture over each of the two dough circles, leaving a ½” border around edge.  Top with bacon bits and sliced onions.

Transfer one of the dough circles, with toppings, {on parchment paper} to pizza stone.  Bake approximately 10 minutes, until lightly golden brown.

These tarts were beyond wonderful!  This recipe elevates “breakfast for dinner” to a new level {worthy of a dinner party}!

This Tart Flambé recipe is an adaptation from a recipe by Chef Gabriel Kreuther of the Modern restaurant in New York City which appears in the February 1, 2013 edition of Saveur magazine.

For the citrus salad…

Because of the illness which has taken up residence in our home, I felt the need to pile on the citrus & vitamin C, the result…our “orange” salad tonight:

We devoured the tarts and ate every slice of orange!