I have never found myself particularly attracted to the cuisine of the Middle East, India, Thailand, Africa or the Mediterranean.  Not because of any dislike mind you but rather ignorance.  Not having been introduced to those foods growing up, my tastebuds were honed on roast beef and mashed potatoes rather than lamb meatballs with barberries, yogurt & herbs.  Don’t get me wrong…I love roast beef and mashed potatoes, but, as I educate myself and look for ways to improve/balance our American diet, I find myself drawn to the cooking of those regions.  If you follow this space regularly, you know that I have fallen in love with Yotam Ottolenghi’s & Sami Tamimi’s Jerusalem, A Cookbook.  The more I cook from that volume the more I find myself craving those tastes and smells.  Nigel Slater hit the proverbial nail on the head for me when, in his The Kitchen Diaries he writes {referring to the foods of these warmer climates}:  “Much has to do with fragrance.  It is what makes me buy an ingredient, it is what brings me to the table.  Mint, garlic, rosewater, lemons…cilantro, cumin, orange blossom water.  These are the scents that make me want to cook, that make me want to eat.”

Harissa, “a hot chili paste that is commonly found in North African cooking, mainly Moroccan, Algerian, and Tunisian cuisine” is new territory for me.  I do not know what prompted me to select this Grilled Chicken with Harissa & Mint for our menu when I came across the original recipe in The Kitchen Diaries but, for whatever the reason, it caught my attention.  Unsuccessful in finding the key ingredient…harissa {the closest I found was a tomato & roasted red pepper harissa sauce, which I bought “just in case”}…I was left to make my own.  After doing quite a bit of research, I settled on this recipe as a starting point based on several positive reviews.  The recipe is quite simple and I had most of the ingredients on hand, with the exception of the caraway seeds for which I substituted ground anise seed… 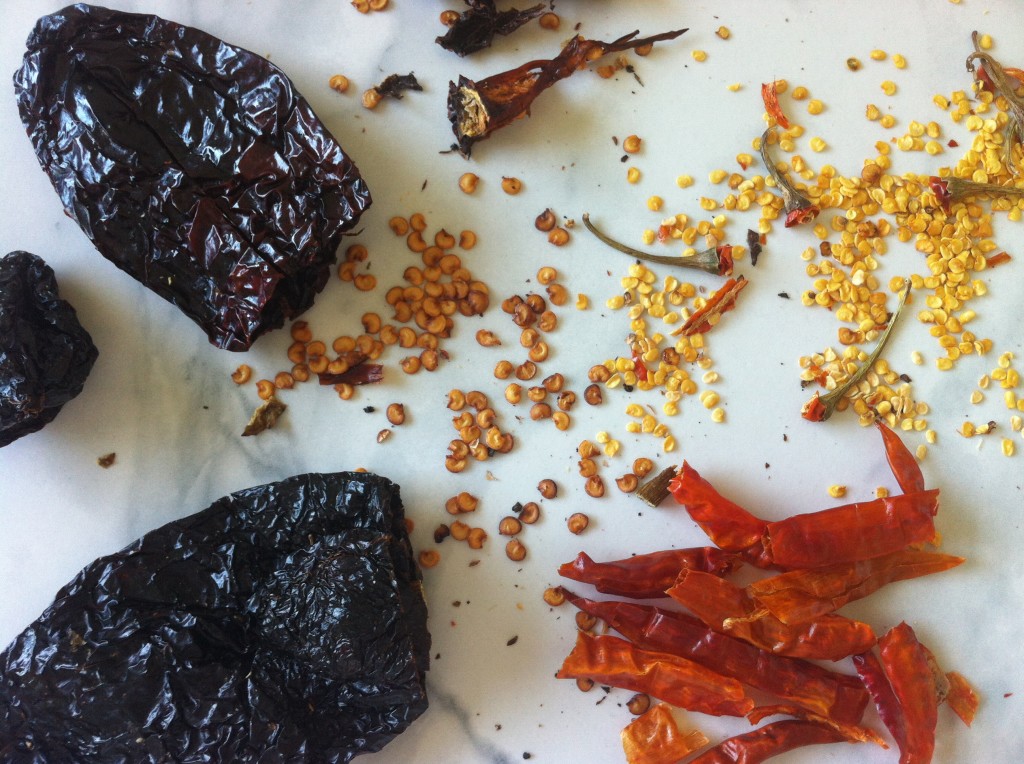 The peppers before & after steeping… 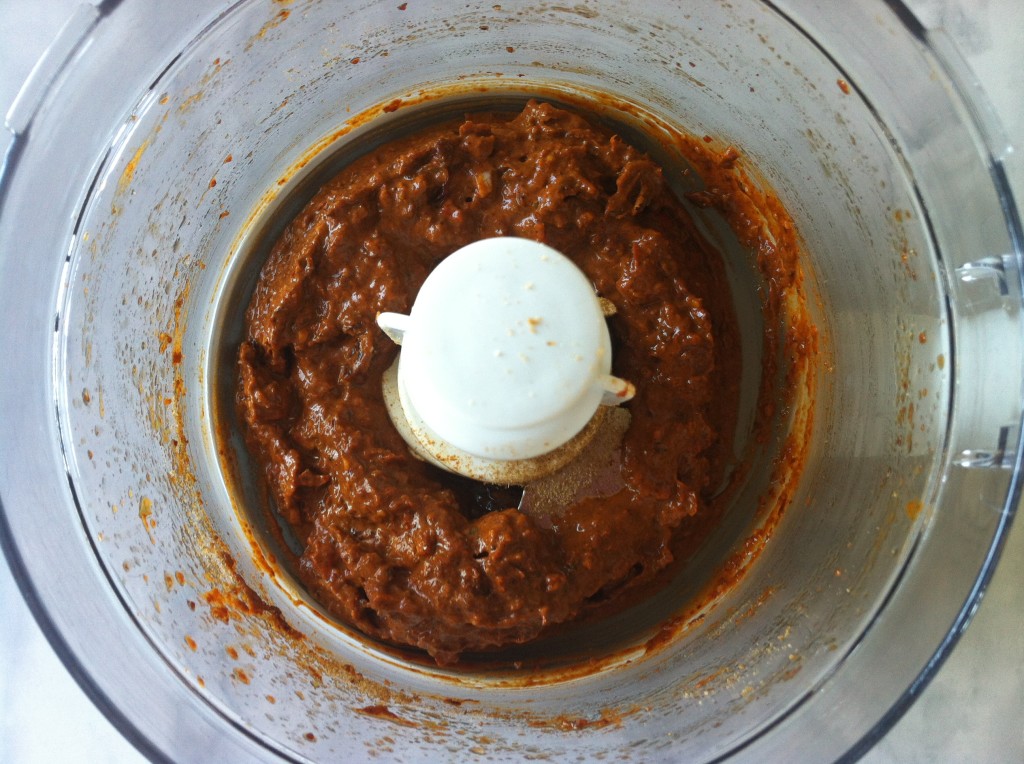 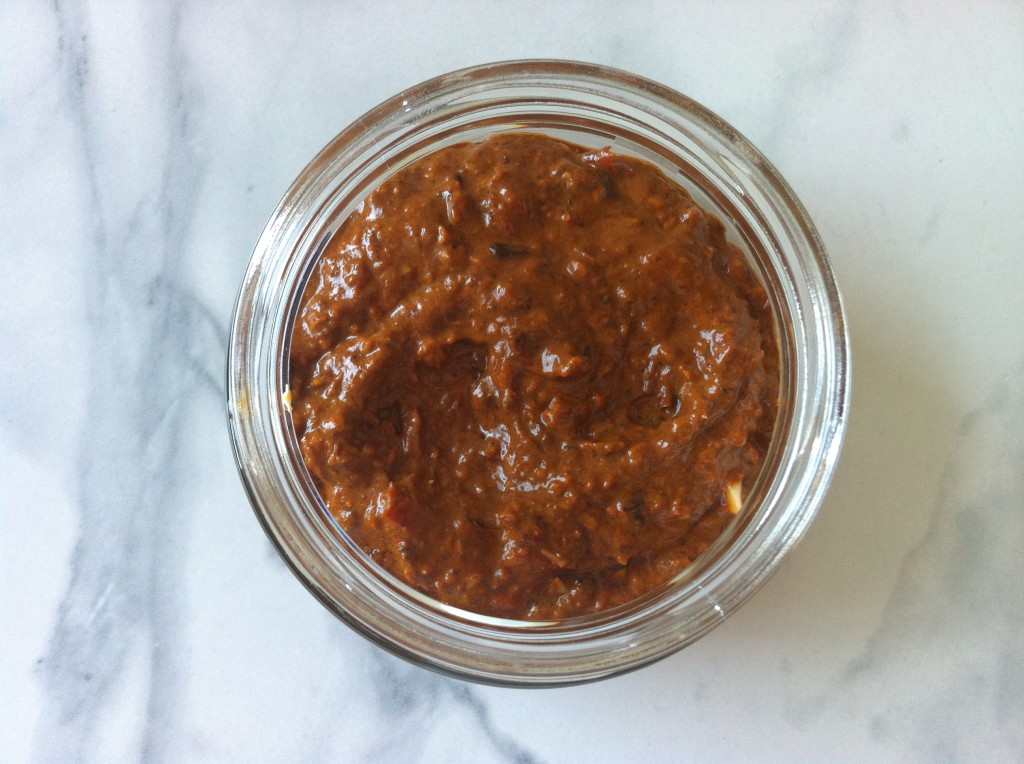 The resulting mixture was quite aromatic but a finger taste of my production left me running for a glass of ice water…it was the HOTTEST thing I have ever tasted in my life!  How was I supposed to serve this to my family?  Plan B:  I would resort to the “just in case” sauce I had purchased.  Here it is, sitting to the right and just below my heated concoction…

Or Plan C:  make a totally different recipe, a known family favorite.  I put the matter aside while I tended to children and after-school activities all afternoon.  Arriving home hours later, scorched tastebuds almost completely recovered and with a renewed sense of adventure, I forged on as originally planned.  The recipe called for adding a bit of the harissa {among a few other ingredients} to yogurt.  I opted to use a Labneh {a Lebanese-style, strained yogurt which I recently learned about from Heidi at 101 Cookbooks } that I had made over the weekend in place of regular yogurt… 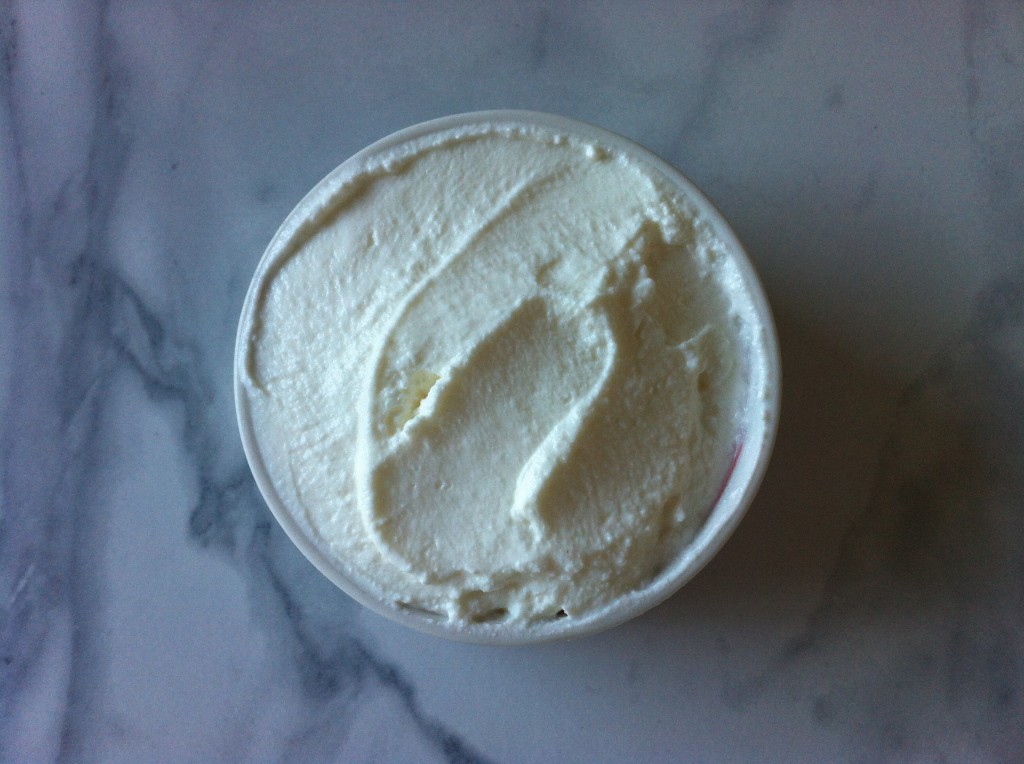 The cooling effect the yogurt had on the harissa was SHOCKING.  The creamy mixture absorbed most of the heat of the harissa while leaving behind the exotic flavor of the aromatic spice blend.  Rewarded for my bravery, the chicken came off the grill a beautiful {and absolutely delicious} success! 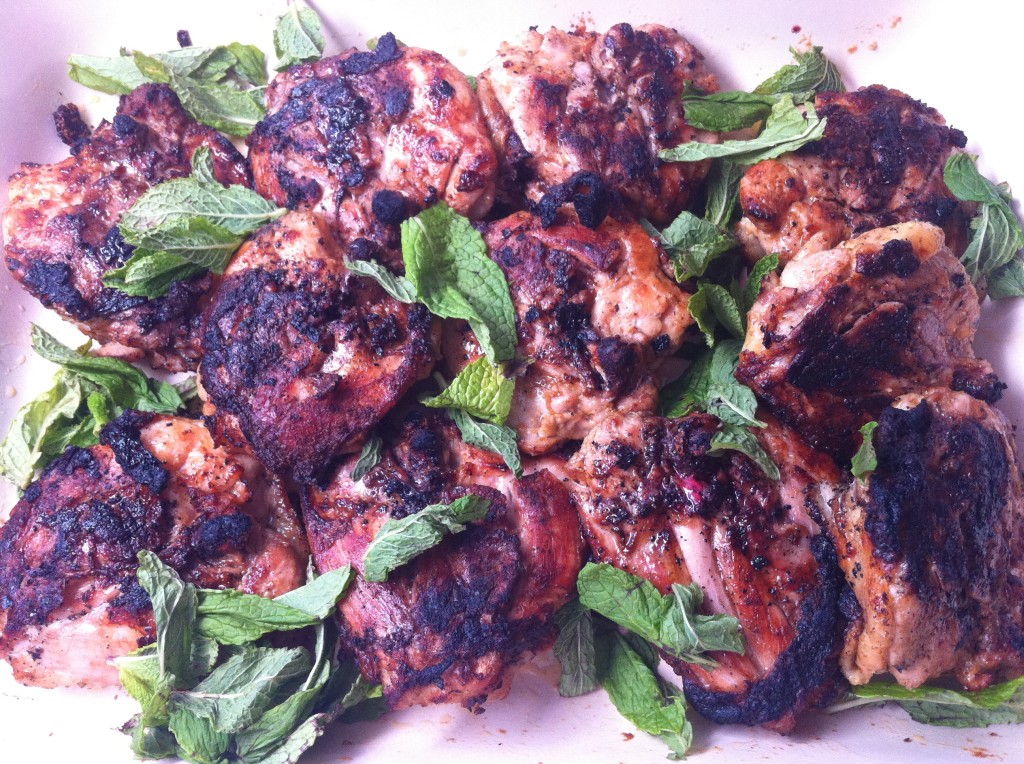 A spinach salad was originally on this evening’s dinner menu but, after enjoying one for lunch, I decided to put together a simple couscous.  It cooks up in just minutes and I wanted to add some lemon and parsley to balance the intense flavors the chicken would deliver… 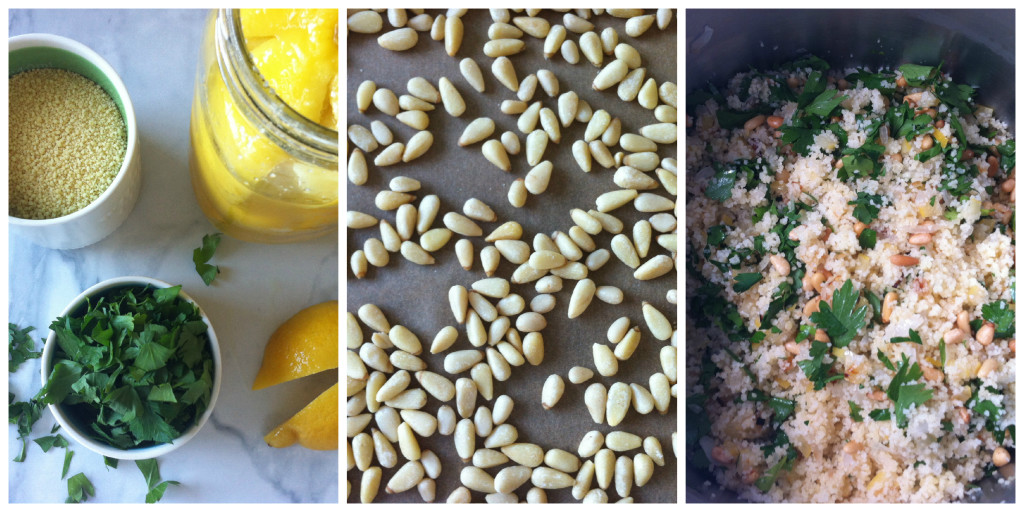 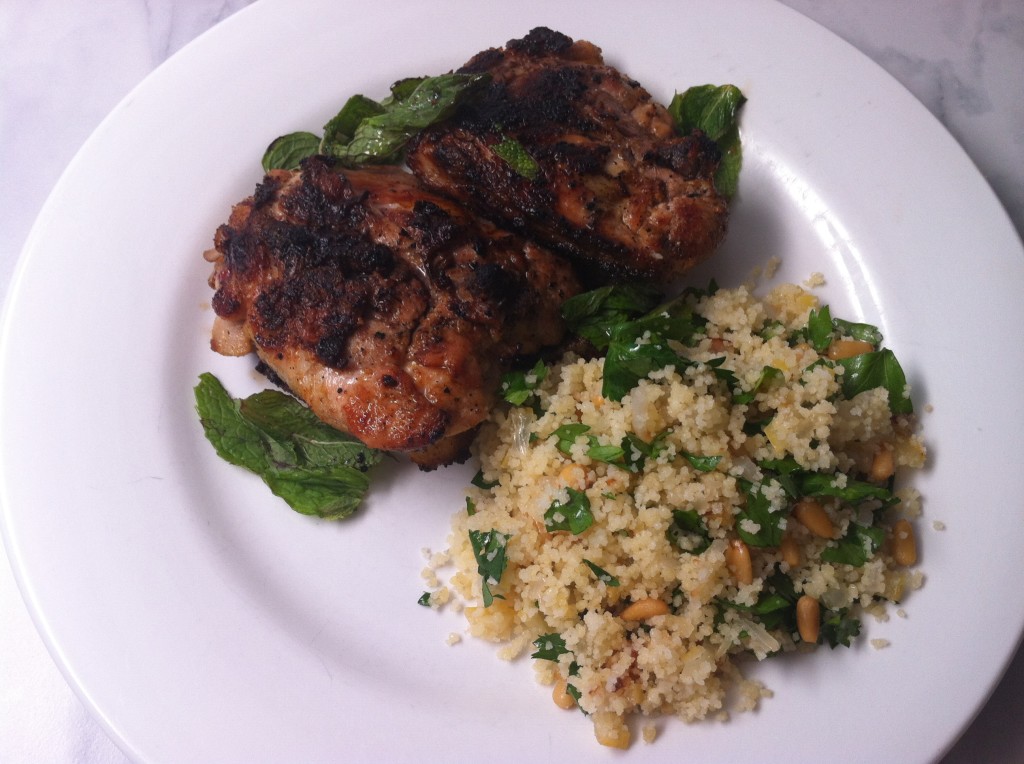 Look what appeared today.  My first tomatoes!  They weren’t there when I watered this morning but Michael spotted them while we were enjoying a glass of wine on the deck before dinner.  So small, but they already smell heavenly... 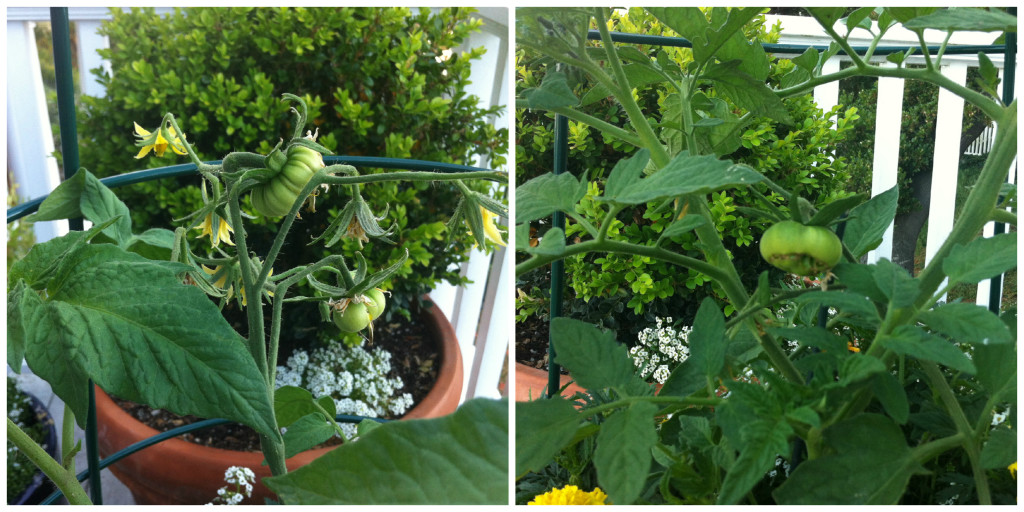