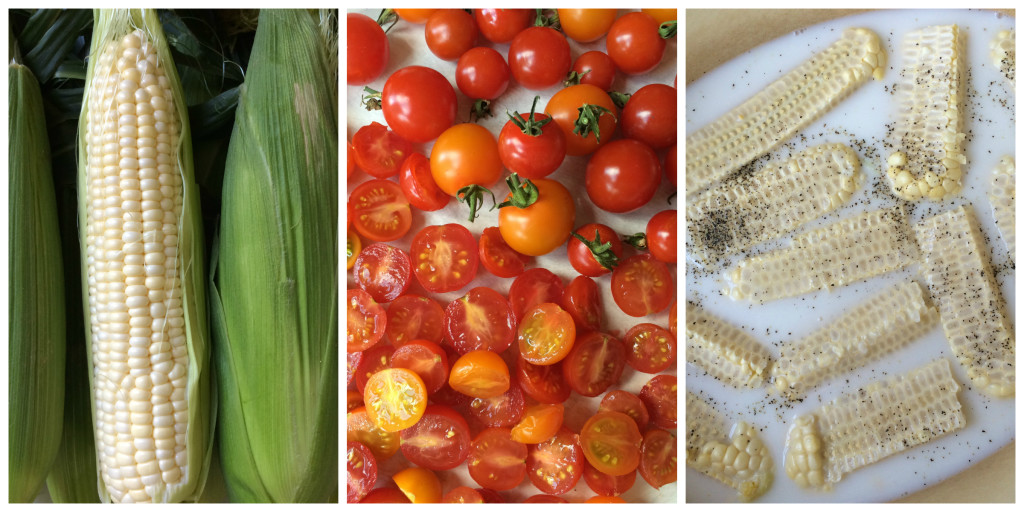 “I have a love affair with tomatoes and corn.  I  remember them from my childhood.  I only had them in the summer.  They were extraordinary.”   ~  Alice Waters

September is knocking at the door.  The children here are back in school and the days are becoming noticeably shorter.  But, before the lingering days of late summer become a distant memory I am savoring every juicy tomato and every ear of sweet summer corn I can lay my hands upon.  As a child growing up in Connecticut, I fondly remember helping my grandmother pick tomatoes from her garden shortly before dinner and eating them while they were still warm from the summer sunshine.  Our corn came from a local farmer {Mr. Burnham}, known for his prize~winning corn…a quaint, white, roadside stand stood in front of his property and each day he would set out for sale the ears which had been harvested a few short hours prior.  I would ride my bike to the stand and pick up just what we needed for that evening’s dinner.  In late August, we would happily make a complete dinner from these two garden gems accompanied by a simple salad.  Those flavors, indelibly etched in my memory, are synonymous with summer for me and the ones I wait all year to enjoy.

I have been making this Summer Corn Chowder for the last four or five years, always in the months of August or early September when corn and tomatoes are at their best.  I have not tried this recipe using hot house tomatoes or frozen corn and I suspect I never will.  Because I use peak of the season corn and fruit, so sweet on their own, I have come to omit the pinch of sugar called for in the original recipe and it has not been missed.  Two other significant changes I made to the original recipe this time:  substituting coconut milk for the dairy and steeping the cobs {after the kernels had been removed} in the coconut milk before adding the rest of the ingredients.  The finished soup was significantly lighter in texture but still rich in corn flavor from the infused coconut milk…simply the best version of this summer soup we have ever had.

The recipe is uncomplicated…basically, a bit of chopping.  The whole production can be finished in less than an hour and is satisfying on its own, chock full of vegetables.  The process begins with shucking fresh ears of sweet summer corn and then cutting the kernels from the cob.  The stripped cobs are then soaked in coconut milk with a sprinkling of sea salt and freshly ground pepper and gently heated to just a simmer to extract all of their wonderful milky flavor… 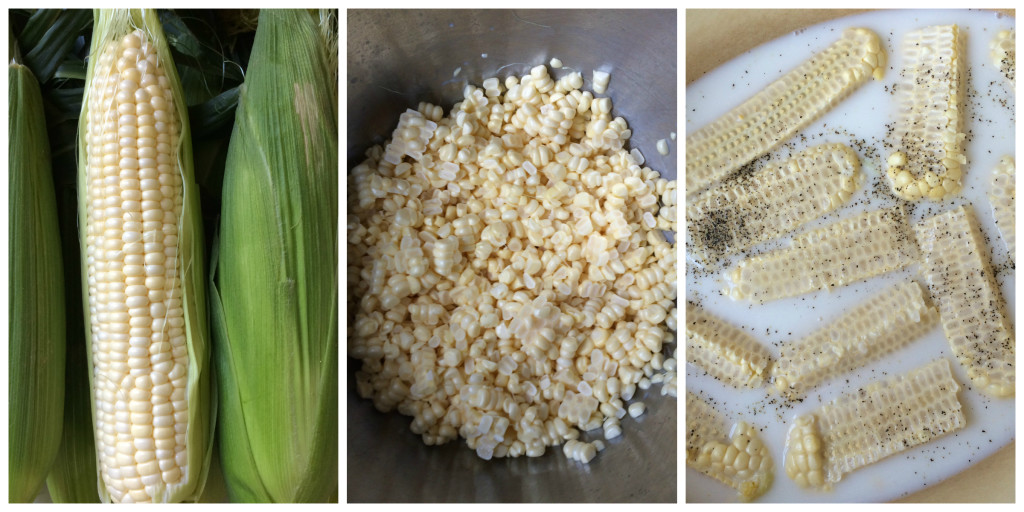 While the cobs steep, the remaining ingredients:  bacon, peppers {both poblano & jalapeño}, onion, celery, tomatoes, and potatoes are sliced & diced… 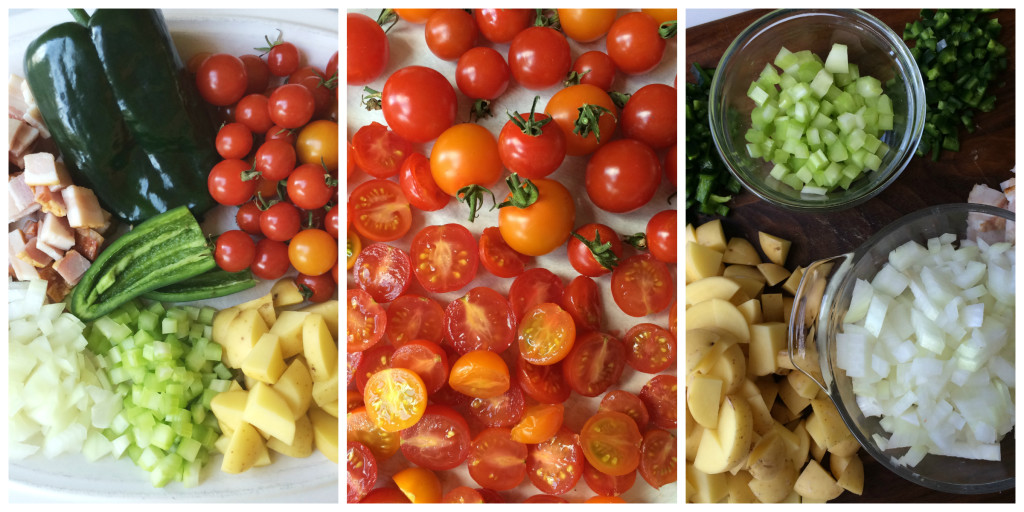 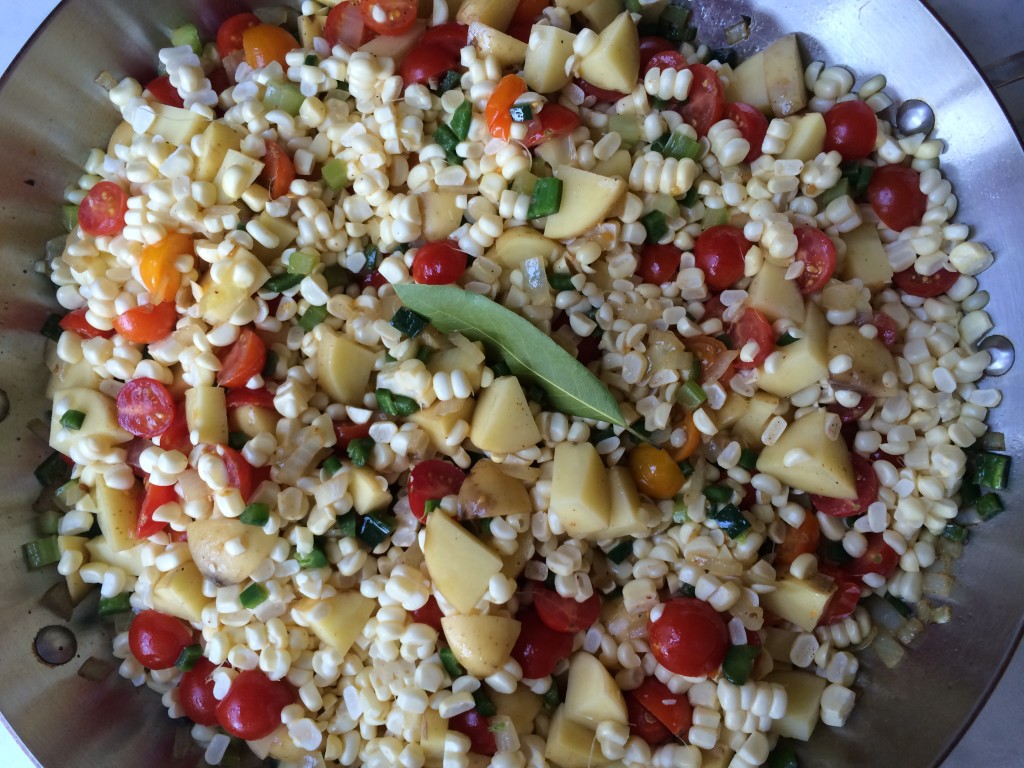 Once the vegetable mixture has been cooked through it is added to the coconut milk broth {cobs removed}, stirred to combine and brought to a gentle boil.  The finished soup is then ladled into serving bowls for a tasty, nourishing one dish meal, perfect for a late summer evening… 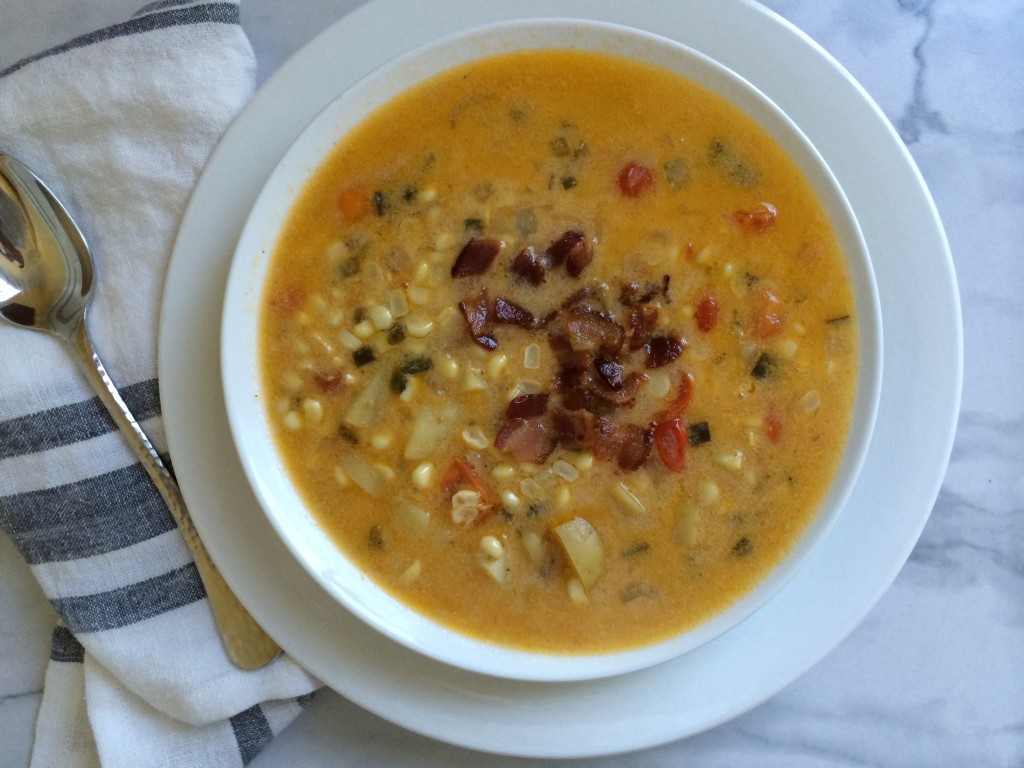