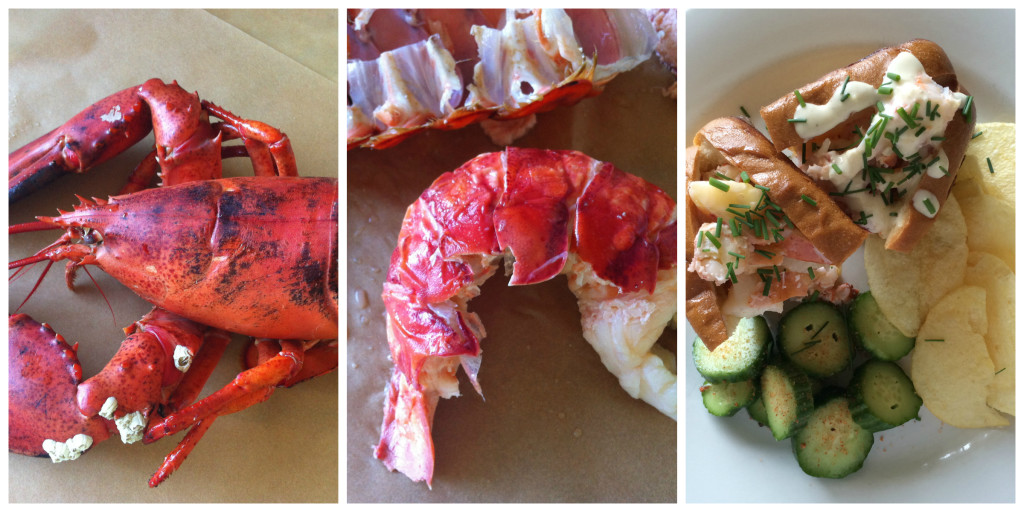 “I’m from Manchester~by~the~Sea, Massachusetts, so it was lobster, lobster and more lobster!”  ~ Sprague Grayden, Actress

Several years ago, while not quite newlyweds {and shortly before the children began to arrive} Michael and I bought our first home in Ipswich, Massachusetts…a small, New England seaside town just a few short miles from Manchester~by~the~Sea and the fishing towns of Gloucester, Rockport and Newburyport.  To this day, neither Michael nor I can remember how we ended up in Ipswich but there we landed, in a 100+ year old, white, farmhouse~style “fixer~upper” perched above the Ipswich River a couple of miles from Crane Beach.  News of our arrival spread quickly throughout the small community and well before the first introductions were made Michael and I became known as “that young couple from New York City”.  Our mortgage broker soon introduced us to her husband {who became our oil delivery person as well as the one who plowed our driveway during the winter} and also referred us to a real estate attorney who not only represented us in the purchase of our house but also became a dear friend.  I played tennis with his sister and his dad {the only pharmacist in town} filled our prescriptions.  Purchases from the purveyors of our day~to~day needs {namely the grocery store, the hardware store and, of course, the liquor store} were all “on account”, billed monthly.  We soon began to realize that the honor system also carried over to the local contractors we hired to work on the house {I should mention that, on our move~in day, we had a dirt floor in the kitchen, the lines to the in~ground pool had been blocked with cement and, despite having an absolutely lovely fireplace in the living room someone had started a rather large fire in the middle of the living room floor}.  When I tried to juggle repair appointments around both Michael and my work schedules, in an attempt to find times when at least one of us could be home, I was often told that was not necessary as each respective contractor either had a key to the house or could get access through a broken root cellar door.  It was all very cozy.

Our first summer in that house found us in the thick of the repair/remodel phase of home ownership, surrounded by dust, dirt, disarray, and…lobster.  Strange, isn’t it?  That crustacean, which has come to be associated with expensive elegance, was everywhere.  You could buy it at the docks, right off the boat, and it made a strong appearance on every restaurant menu for miles and miles…you could even get it delivered to you at the beach.  One might even venture to say that during the month of August at least one of those heavy~clawed sea creatures could be found in every household refrigerator along Boston’s North Shore.  Not only was it readily available, that summer lobster fit our way of dining….quick and easy, requiring no more than a pot of boiling water, newspaper scattered over any flat surface, a hammer {there were always plenty of those around} to crack the shells, some melted butter and a wedge of lemon.  A glass of wine made it all seem civilized.  I now live on the shores of the San Francisco Bay and, although the lobster has a few more miles to travel before landing on my plate, I always manage to satisfy my craving for this rich, tender shellfish from the waters of the Atlantic at least once or twice every summer. 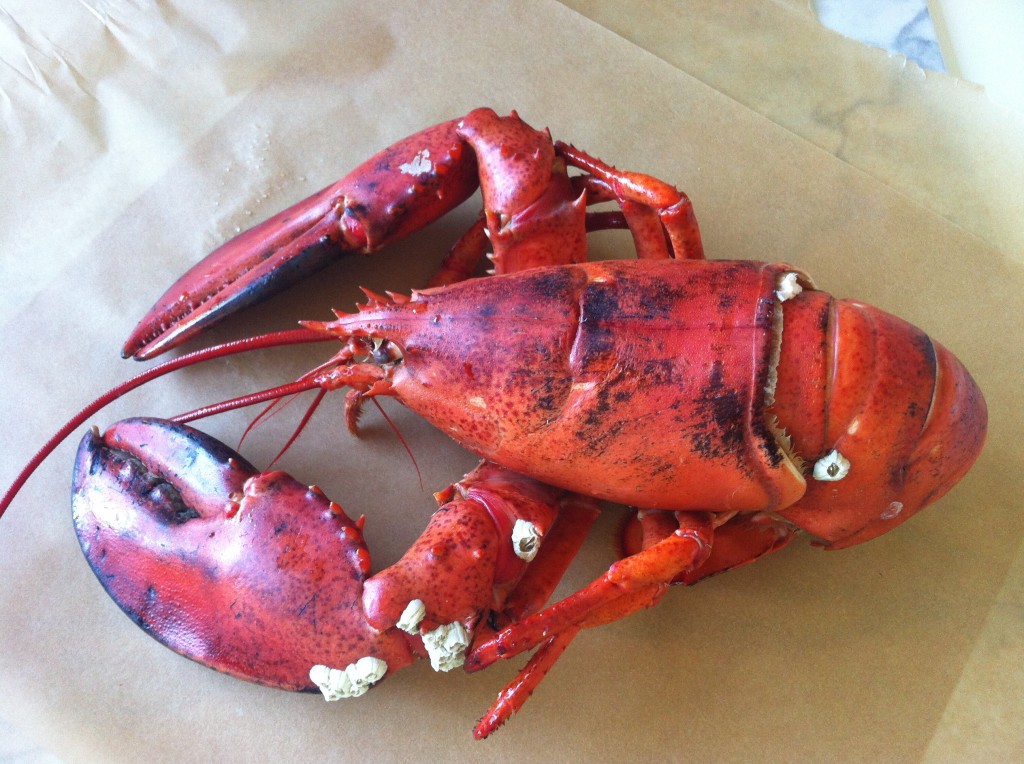 When it comes to lobster we like to keep it simple, after all, that succulent meat doesn’t require much more than some drawn butter and a wedge of lemon to be at its very best.  Add a buttery, toasted bun and a drizzle of a lemony aioli and you have yourself one fantastic summer sandwich!  The preparation of these rolls is quick and easy, perfect for a casual dinner after a day spent at the beach or on a boat.  Once the lobster has been cooked {we prefer boiling or steaming}, the meat is removed from the shells… 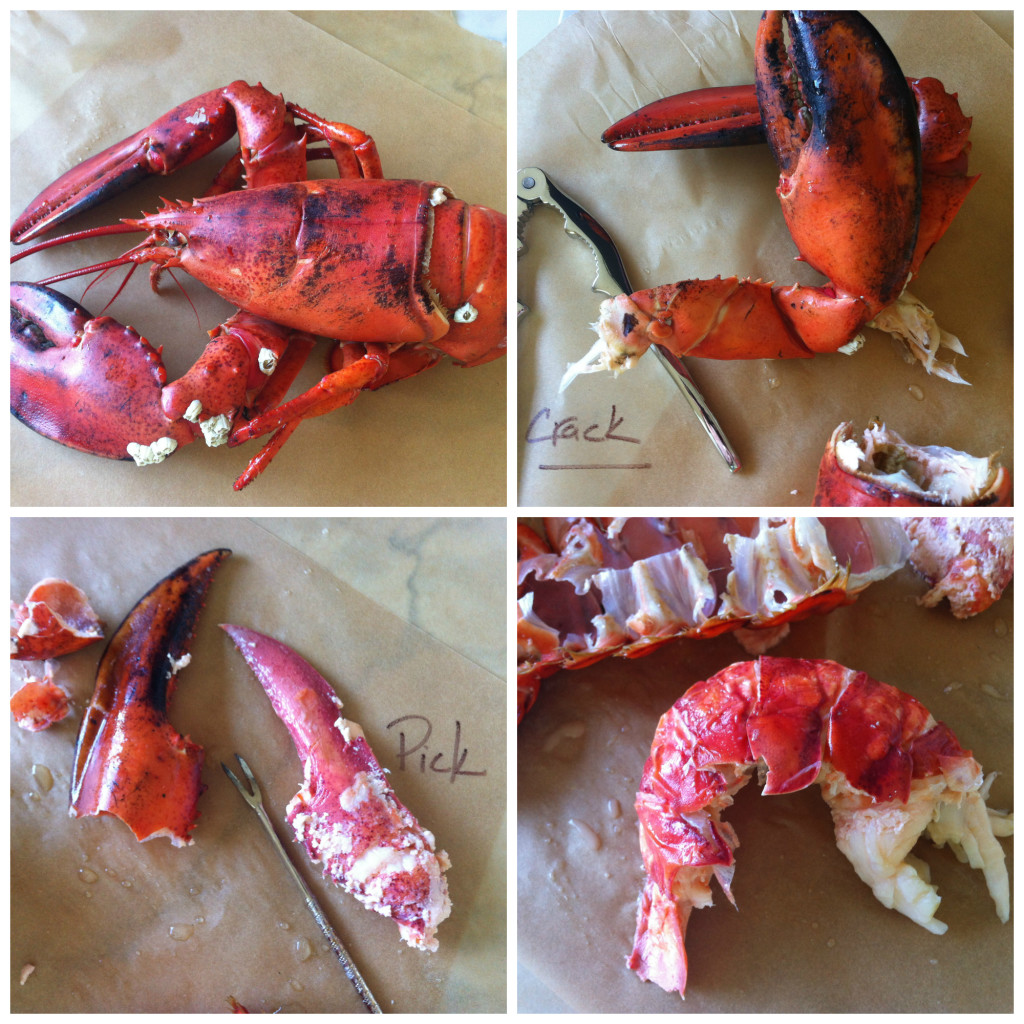 Note:  Don’t discard those bodies or empty shells quite yet!  Save them in a sealed plastic bag, along with the boiling or steaming water {in a separate container} stored in the refrigerator overnight.  They can be used to make the stock for a delicious Lobster Bisque for dinner number 2, which is what we did this week.  Two lobsters yielded two dinners for four people…nothing was wasted. 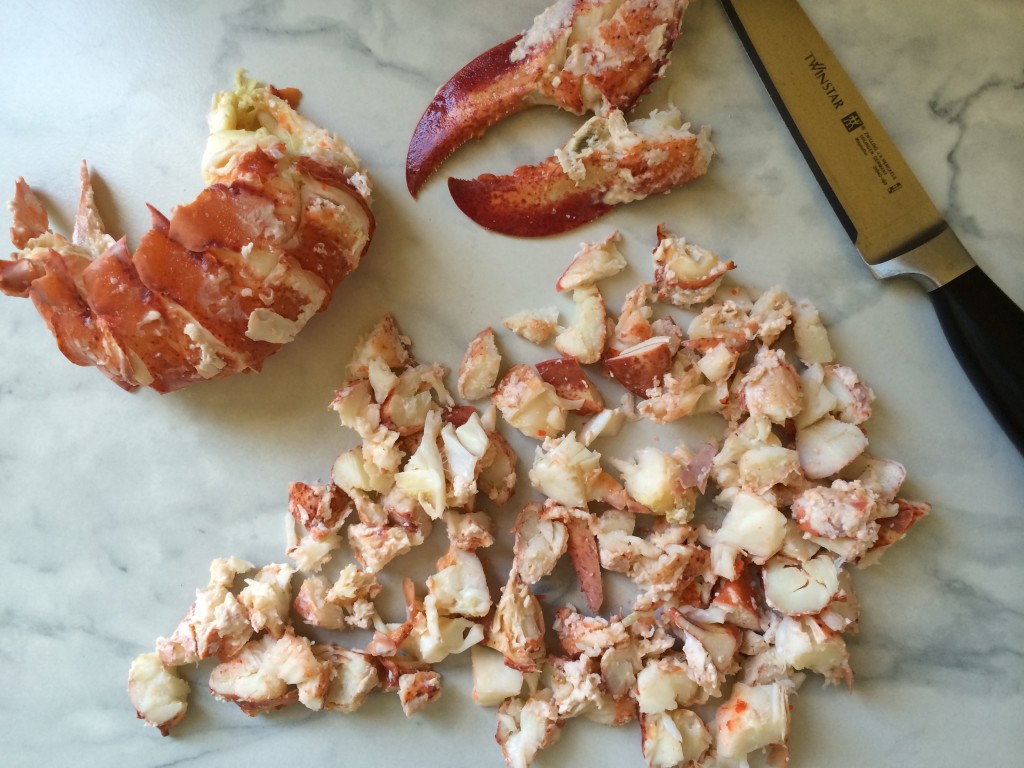 If cooking the meat ahead of time, it can be stored in an airtight container in the refrigerator and then brought to room temperature before making the rolls.  When it comes time to assembling the rolls, a fresh split~top roll is authentic but any good quality bun will do {buttering each side and toasting to golden brown in a hot skillet}.  As for the filling, there are basically 2 schools of thought… 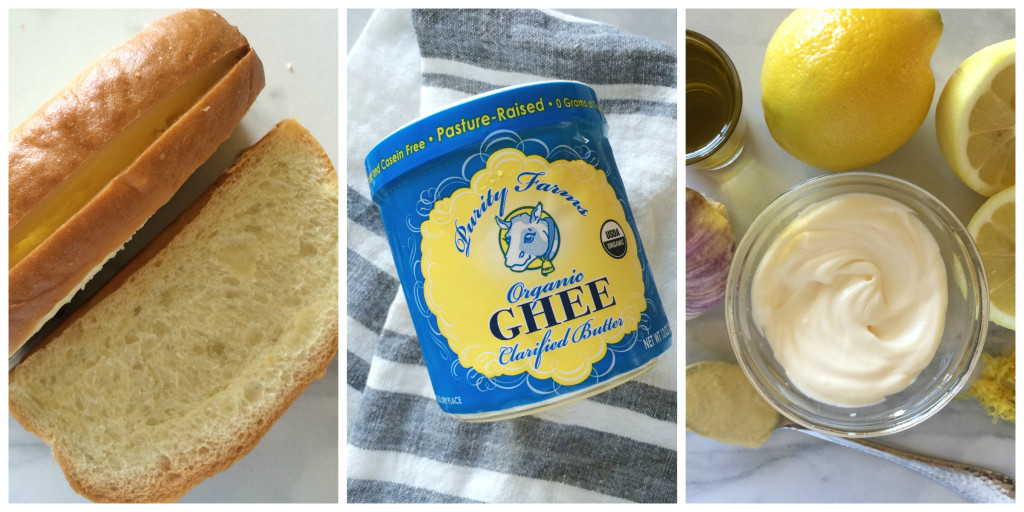 There is the Connecticut~style lobster roll {my preference} which is simply warm lobster meat stuffed into a roll and served with nothing more than some drawn butter {I like to use ghee}.  The Maine~style lobster roll involves tossing the meat with some mayonnaise and diced celery and chilling before stuffing the “salad” into a toasted bun.  I have never been a fan of tossing tasty lobster meat in a heap of mayonnaise where its flavor can sometimes get lost in the dressing. Rather, I will make a quick aioli using some mayonnaise, fresh lemon zest and juice, pressed garlic, a bit of Dijon, a kiss of olive oil and a sprinkling of paprika and lightly drizzle the mixture over the assembled roll…my version of a lighter Maine~style lobster roll with just a touch of lemony creaminess from the aioli topping.  I cut my roll in half and enjoy one side with the butter and the other with the aioli, while a few snipped chives from the garden finish off this summer sandwich… 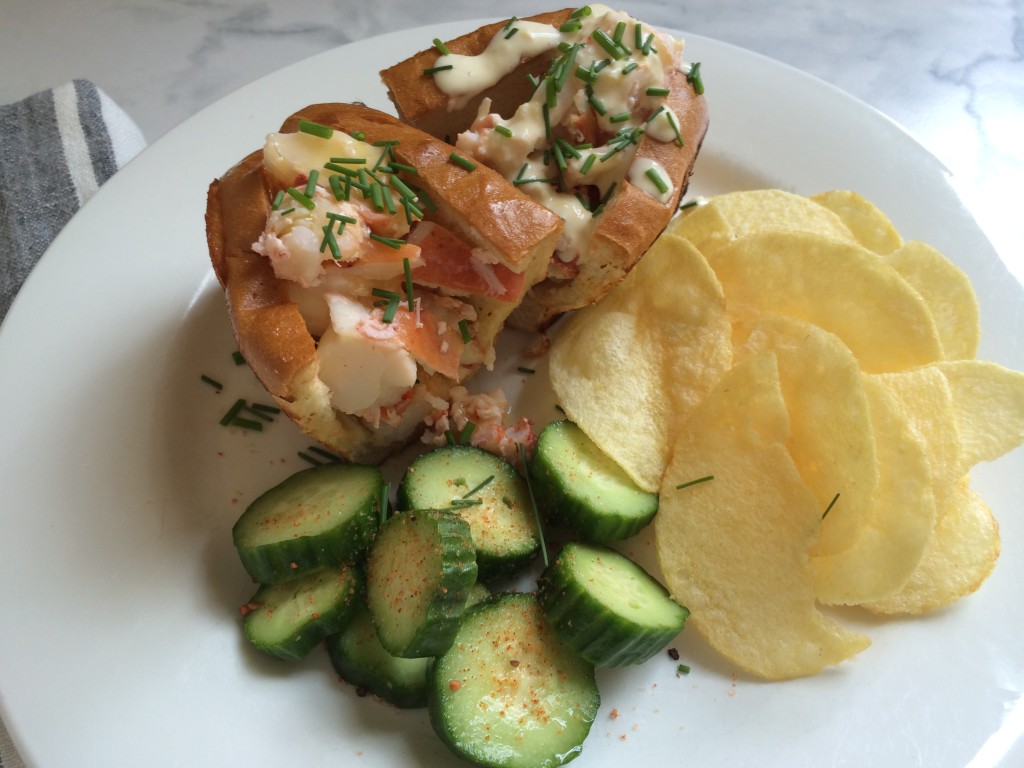 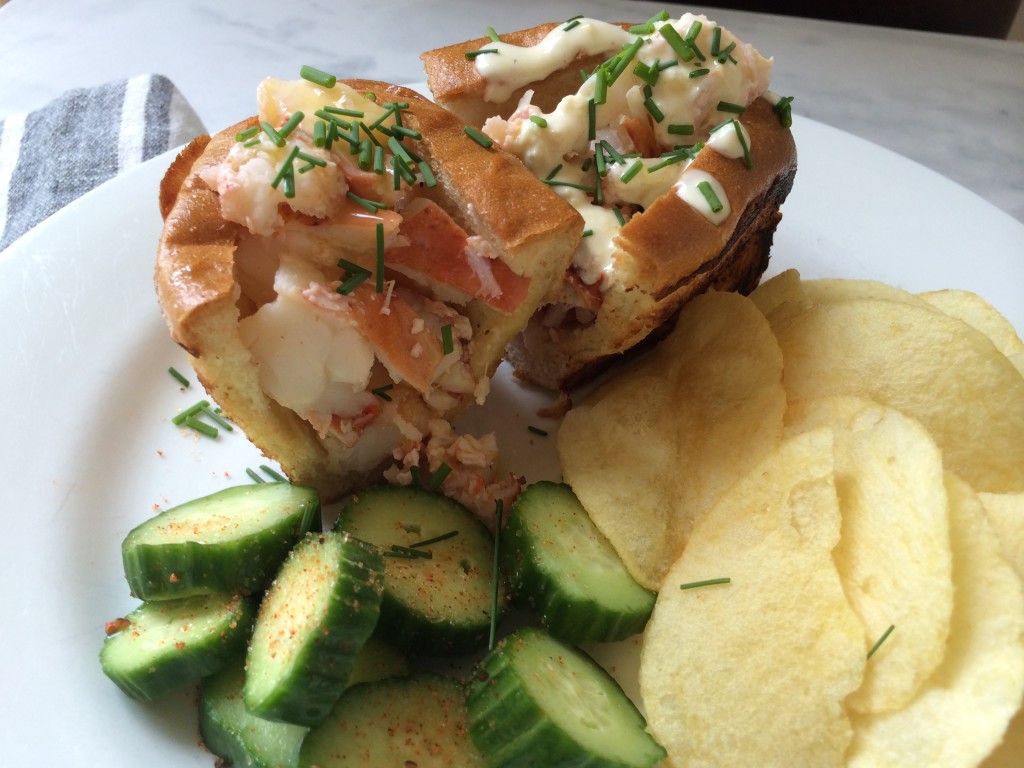