When I first saw this recipe in the October 2012 issue of Bon Appetit I knew it would make our dinner menu at some point in the near future.  Well, with a large pork roast waiting in our freezer, this slow, aromatic braise was the perfect fit for this week’s Sunday dinner.  The ingredients are simple and most of which I had on hand {with the exception of the cider & ginger beer}.  I removed the roast from the freezer on Thursday, giving it adequate time to thaw.

The preparation began yesterday by seasoning the pork roast, all over, with kosher salt & freshly ground pepper.  I then tied the pork roast and tightly wrapped in plastic wrap, returning the packaged roast to the refrigerator to sit overnight… 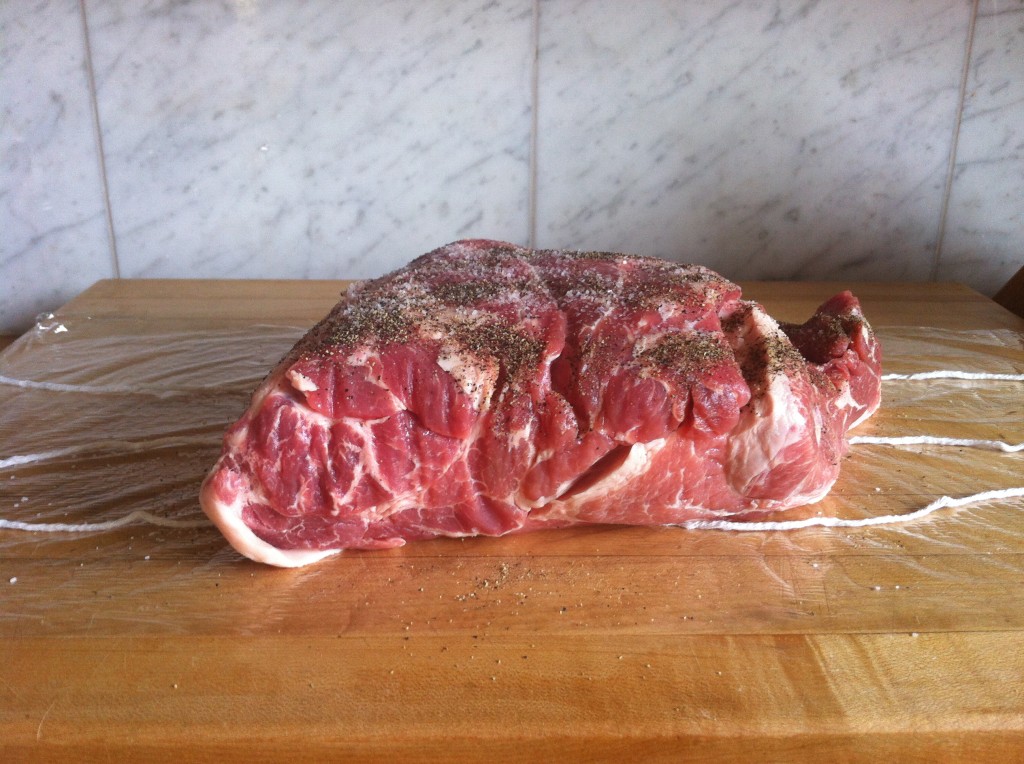 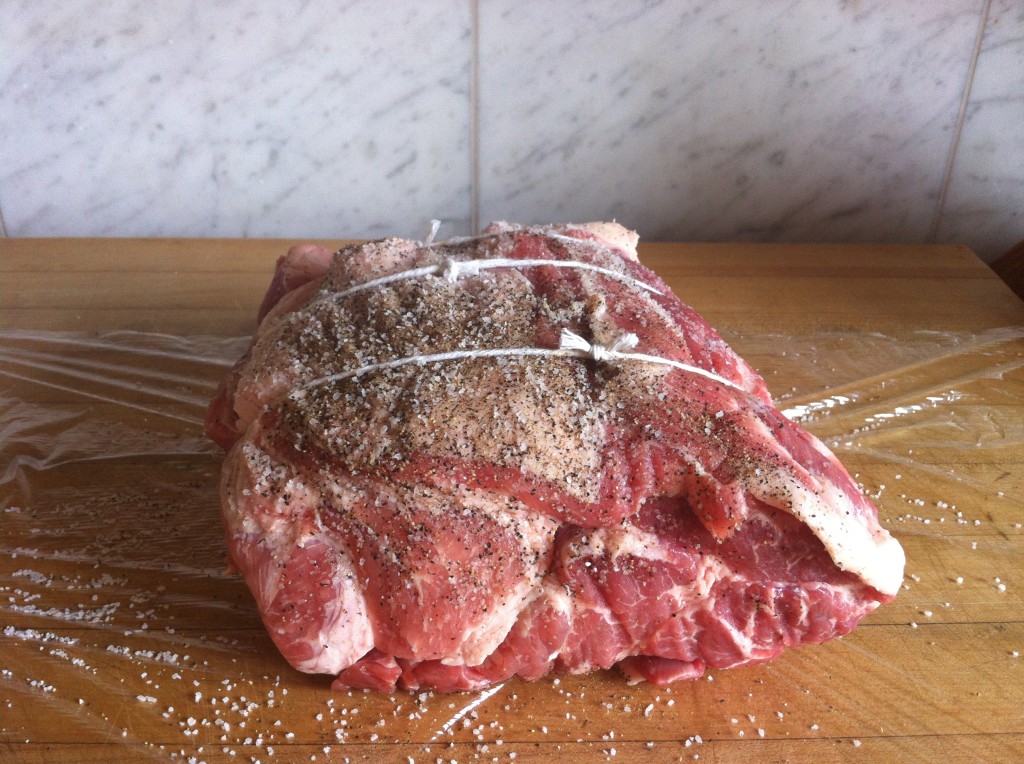 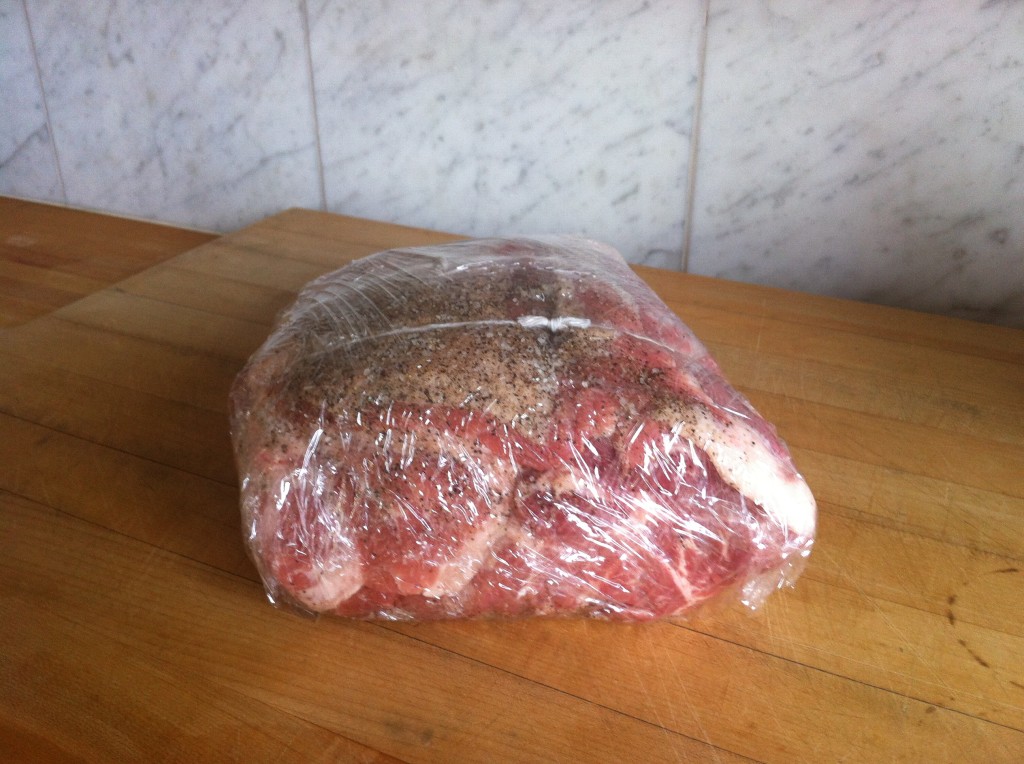 This morning, I removed the roast from the refrigerator and let it come to room temperature {2 hours}.

I preheated the oven to 300° and then gathered the necessary ingredients:

The recipe called for a large, heavy ovenproof pot with a tight-fitting lid…my very favorite Dutch oven {which I have had for years}… 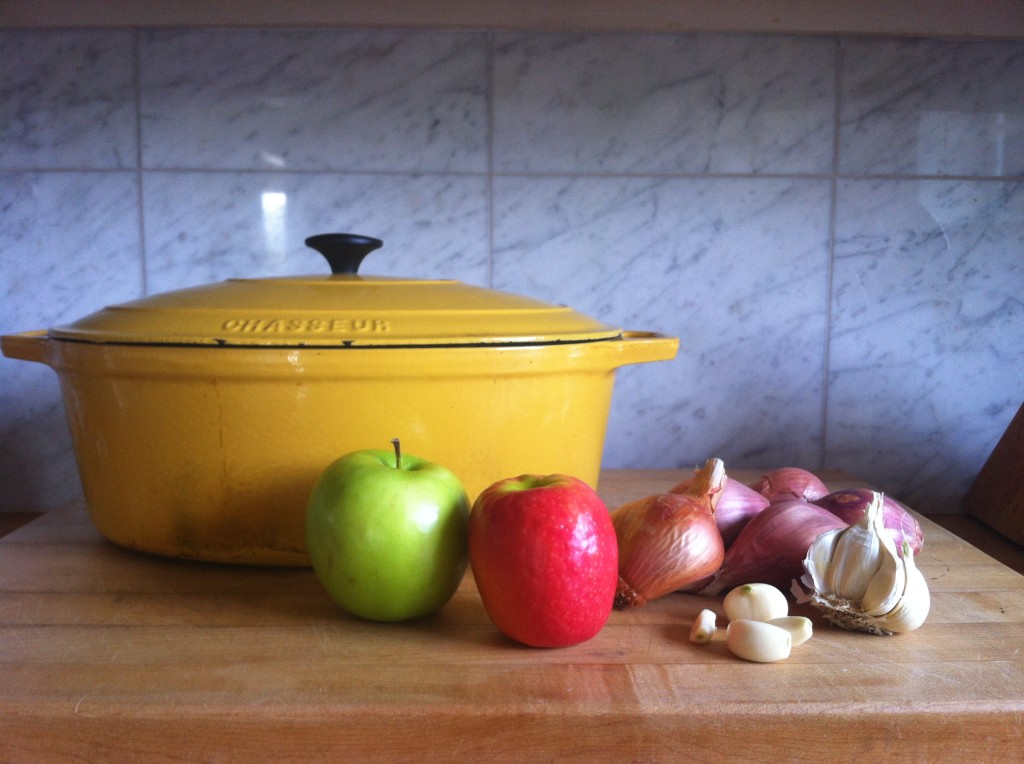 I arranged the shallots, garlic and apples around the pork in the Dutch oven.  I then topped with the rosemary sprigs… 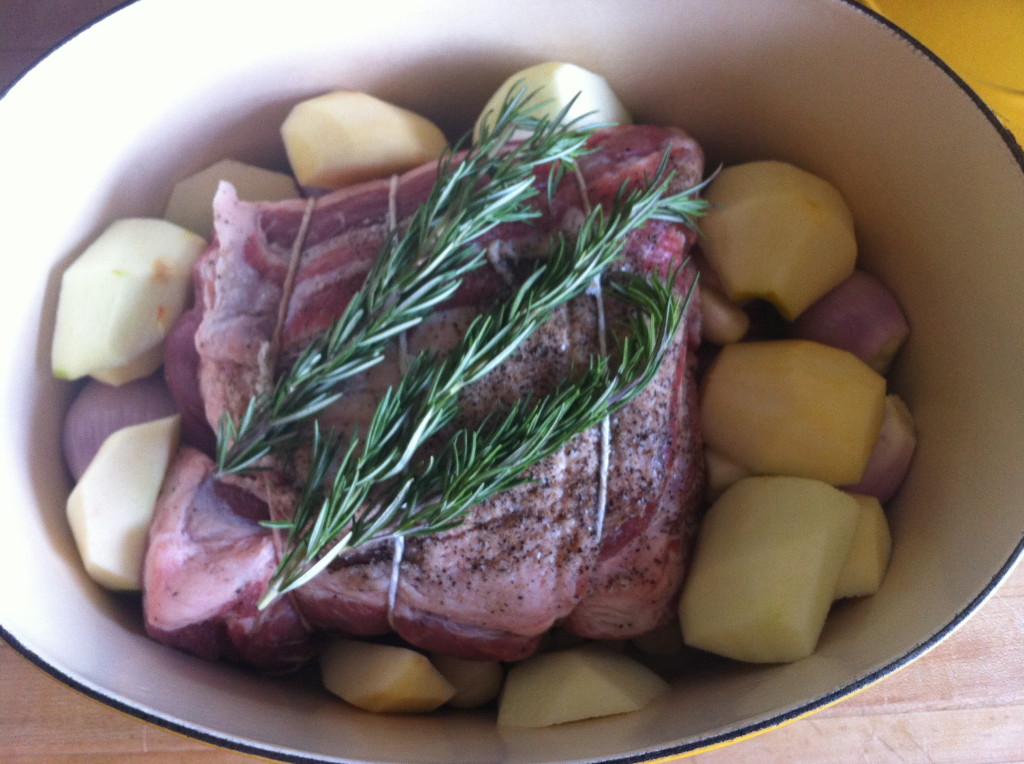 After adding all of the liquid ingredients, I placed the pot on the stove over a high flame and brought to a boil.  I covered the Dutch oven and transferred to the preheated oven.  The roast braised in the oven for 5 hours…the house smelled so wonderful on this very cold Sunday.  Once the meat was done {a knife slid easily through the meat}, I removed the pot from the oven and set aside to allow the roast to cool in the braising liquid.  Once cooled, I placed the covered pot in the refrigerator {the meat is easier to slice when cold} for only about an hour but you can let the roast stay in the refrigerator {covered} for up to three days.

After removing the roast from the refrigerator, I pre-heated the oven to 350° and transferred the meat to a cutting board, keeping it tied with the kitchen string.  Next, the braising liquid needed to be strained through a fine-mesh sieve {or a colander lined with cheesecloth} into a bowl {the fat & solids discarded} and set aside.  I then sliced the pork roast {again, cutting around the string} and put the pork slices in a roasting pan.  Once the slices are in the roasting pan the string can be removed and discarded.  Now, 2 cups of the braising liquid get poured into the pan, making sure the meat is covered halfway.  I covered tightly with foil and baked until the meat slices were heated through, about 15 minutes.  {If your roast was in the refrigerator longer, it may take more time to heat the meat at this point}.

While the pork slices heated in the oven, I transferred the remaining braising liquid to a saucepan and brought to a boil over high heat, cooking until liquid was reduced to 2 cups, and then seasoned with salt & pepper.

I transferred pork slices to individual plates and drizzled with some of the sauce and served with the Yukon Gold & Fennel Purée with Rosemary Butter  & Sautéed Broccolini with Garlic & Red Pepper Flakes {recipes follow}.

During the roast’s last hour of cooking I started the fennel purée for tonight’s Yukon Gold & Fennel Purée with Rosemary Butter …. 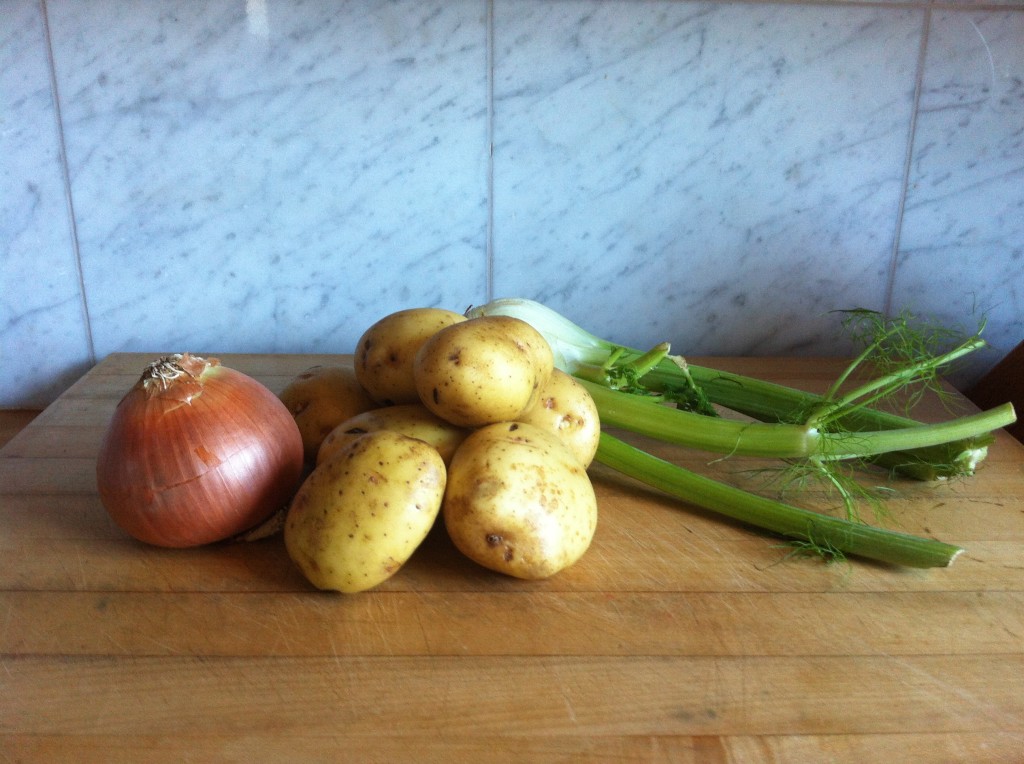 I tossed the cut fennel and onion in a bowl with the olive oil and salt & then transferred to a baking sheet lined with parchment paper and sprinkled with freshly ground black pepper.  I placed the baking sheet in the 300° oven {next to the pot containing the pork roast}.

Once the fennel and onion went into the oven to cook for about an hour and a half, I peeled and cut the potatoes and put them into a pot of cold, salted water.  I brought the potatoes to a boil and cooked until very tender, about 30 minutes.

While the potatoes cooked, I removed the fennel and onion from the oven and let cool slightly.  I then transferred those vegetables to a food processor and puréed until smooth and set aside to wait for the potatoes.

When the potatoes were done, I removed  the pot from the heat and drained, returning the potatoes to the warm pot where I mashed until smooth.  I then mixed in the fennel purée.  Now it was time to quickly make the rosemary butter…

I placed the butter with the rosemary and the salt in a glass bowl and melted in the microwave.  The butter mixture was then stirred into the potato-fennel purée and seasoned with salt and pepper. {I never added the crème fraîche called for in the original recipe…the potatoes were so creamy already, thanks to the fennel purée}.

Last, but not least, the broccolini… 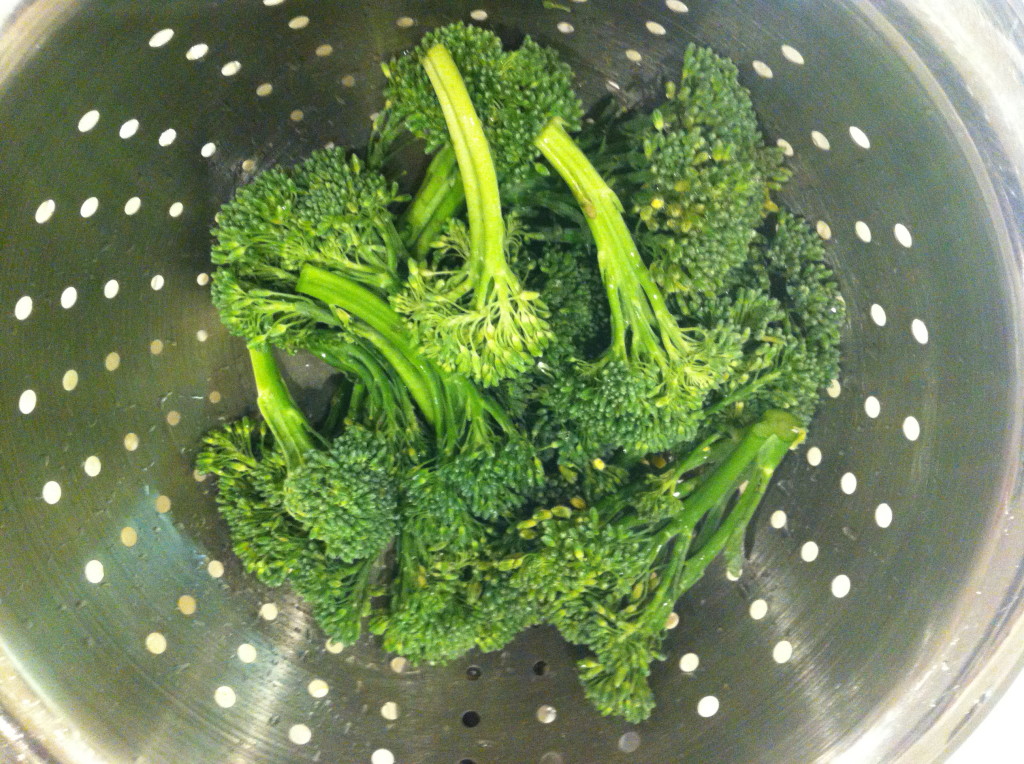 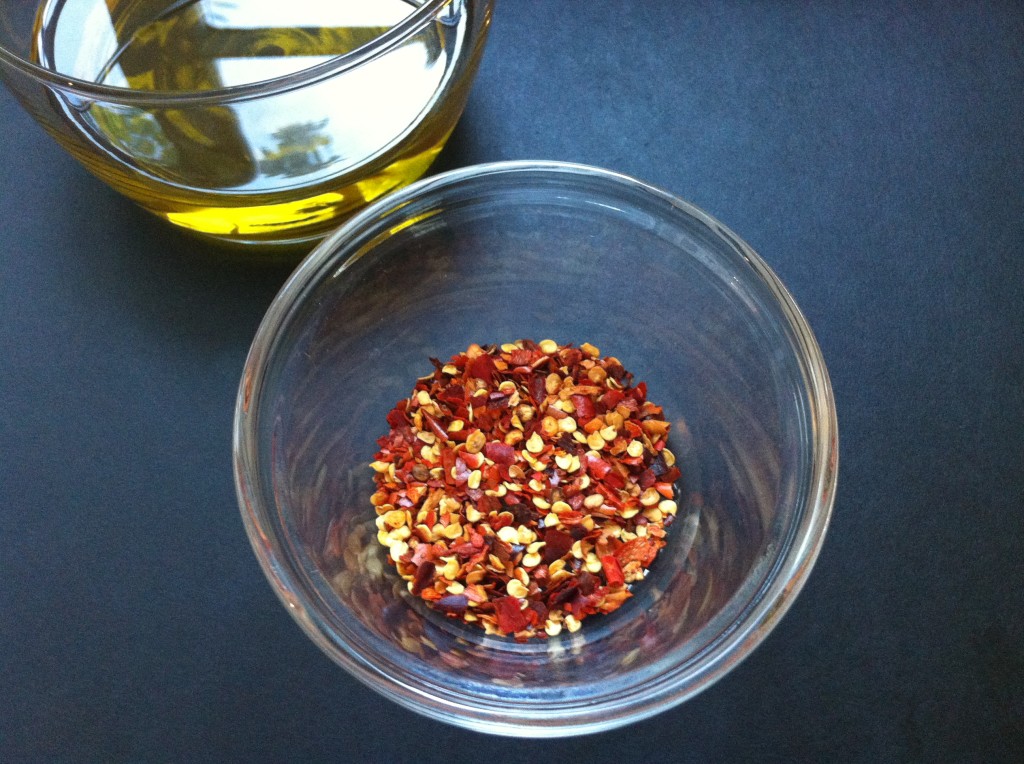 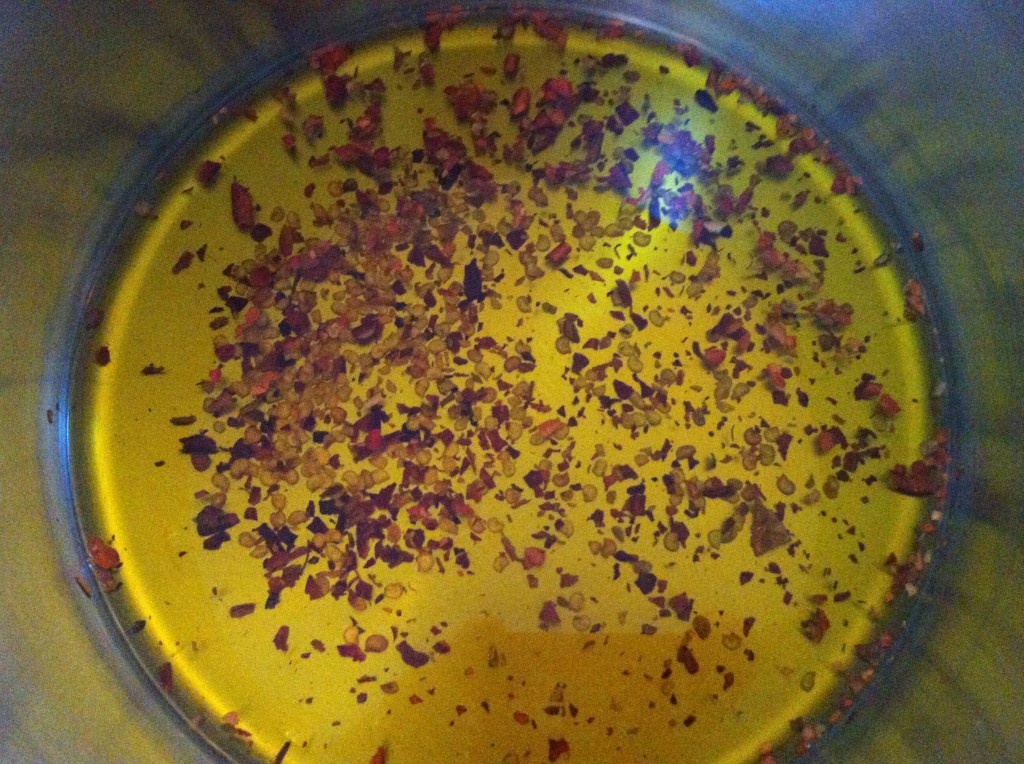 Tonight’s dinner was definitely a Sunday Dinner or a something special dinner.  I like making Sunday dinners special.  During the week, our lives are so chaotic…if there is one day a week we can indulge in a special family dinner it is Sunday.  More than any other day of the week, Sundays are about family, home…kitchen.

The pork was out-of-this-world {worthy of a dinner party} and the potato/fennel purée was so creamy {even without any milk or cream}.  The broccolini had just the right amount of kick and the left-overs will make a perfect topping for our South Philly-Style Pork Sandwiches on Wednesday night.

Have a Great Week!