I have fallen behind this week…it happens.  Our dinners from the beginning of the week did not get posted, emails sending New Year’s wishes and recipes to try from wonderful folks like yourself, who regularly join us for dinner here, sit unanswered in my inbox {thank you so much for these lovely notes which brighten my day, I promise you all a response soon} and the window box which hangs below my front window remains empty following a late night nibble session from a few resident deer { now that California is under a state of emergency due to the lack of rain, I suppose that window box will remain empty a bit longer}.  Nothing out~of~the ~ordinary has caused this, no catastrophic events, no illness, no chaotic schedule {well, no more than normal}, just my own doing.  On Tuesday night, instead of working here, I shared a pot of tea and watched a movie with Maddie.  On Wednesday morning, following an announcement by Max that he could not hear out of his left ear and the subsequent two-hour pediatrician visit and successful flush of his ear canal, we played hooky and enjoyed a long, leisurely lunch by the water in Sausalito.  With schedules that are normally packed so tight with to-do’s, there is rarely any “wiggle room” to enjoy the moment…it must be a conscious decision to choose those moments over obligations.  As the children get older, I have become painfully aware that moments, like the ones I chose this week, are fleeting, while my lists remain safely tucked on my computer or in my desk awaiting my eventual return.

This evening’s dinner is the perfect solution for a weeknight dinner…easy, quick and incredibly tasty…especially during a week when there just doesn’t seem to be enough time to do everything.

Boneless, center cut pork chops, while lean and inexpensive, rarely are a dinner choice for us.  Basically, I find them incredibly dull when it comes to flavor and they can dry out in a matter of seconds if not watched closely while cooking.  This recipe, however, may just bring this cut of pork back into our regular dinner repertoire. 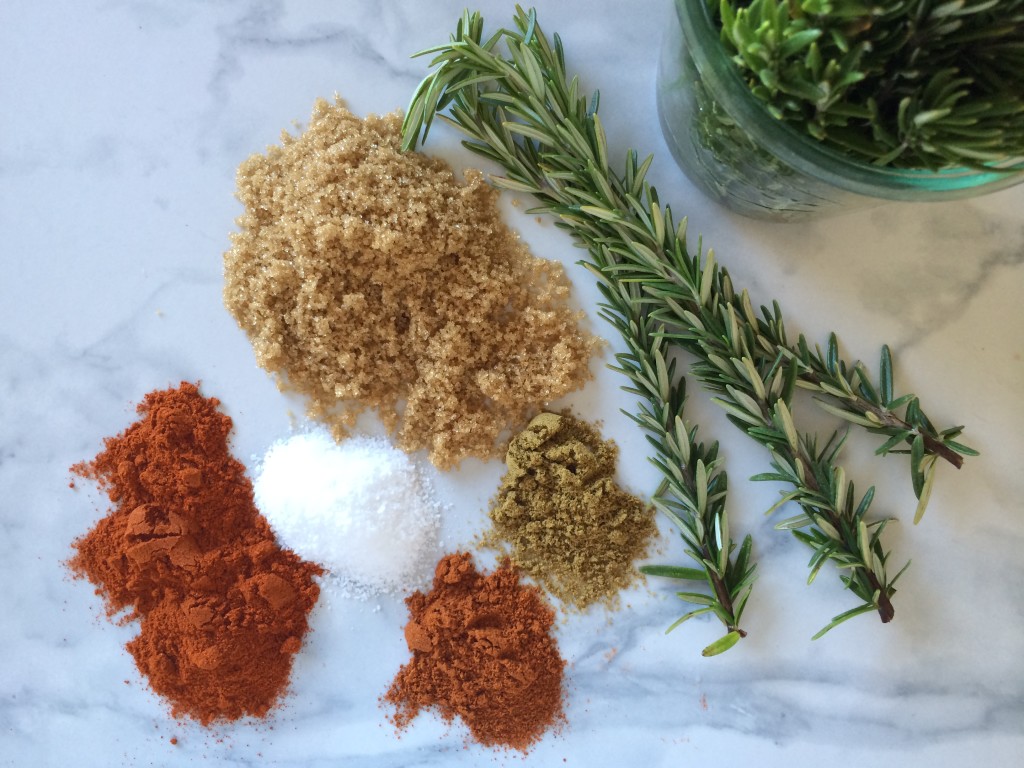 The key is the dry rub which marinates the meat and then creates a wonderfully caramelized coating on the chop when cooked.  A base of brown sugar is spiked with minced fresh rosemary, ground cumin, cayenne pepper, sweet paprika and a dash of sea salt. A generous coating of the rub is then applied to both sides of the pork chops and then they marinate, covered and refrigerated, for anywhere between 20 minutes and up to 24 hours {today, mine cured in the refrigerator for 8 hours}. Come dinner time, a turn in a hot skillet {4-6 minutes per side, depending on thickness} produces a tasty chop with moist, tender meat and a caramelized coating with a bit of kick… Skillet roasted Brussels sprouts were served along with the pork chops tonight.  Bacon, in some form or another, usually makes its way into our Brussels sprouts but when I saw this recipe I thought the apples and onion would be a great (and lighter) pairing with the pork.  The original recipe calls for the ingredients to be thinly sliced and then caramelized in a skillet.  We prefer our Brussels sprouts on the firm side when cooked so instead of finely slicing the sprouts, onion + apple (peel left on for color and texture) I simply diced all ensuring a bit more texture to the finished sauté. The diced onion was cooked first allowing it to soften a bit and then the apples and Brussels sprouts were added, along with the vinegar and spices and cooked until the sprouts turned bright green and were just beginning to soften. Brown sugar, cumin + cayenne, spices found in the dry rub for the pork chops, were echoed here but a dose of apple cider kept the overall taste of the sauté from being too sweet.  These skillet roasted brussels sprouts paired so well with the flavorful pork chop.