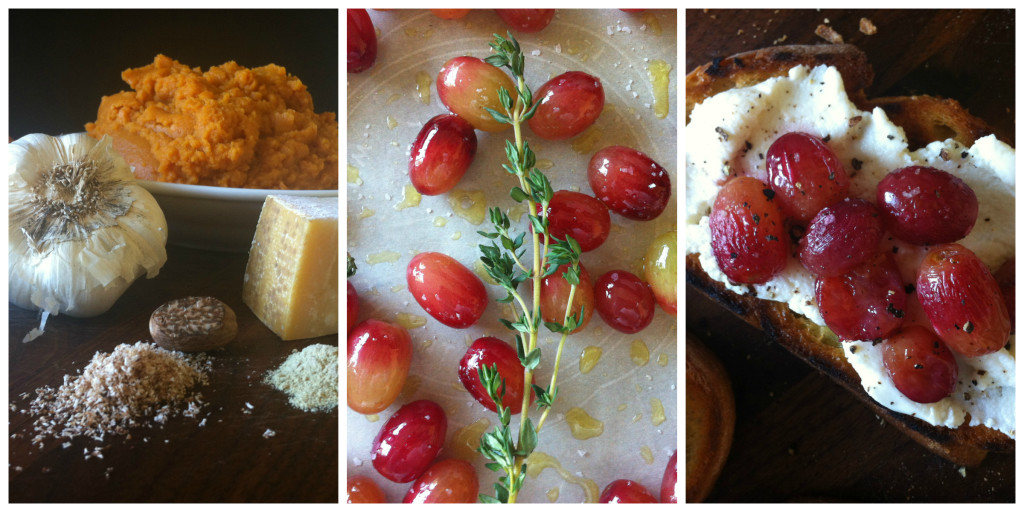 “One day many years ago a man walked along and stood in the sound of the ocean on a cold sunless shore and said, “We need a voice to call across the water, to warn ships; I’ll make one. I’ll make a voice like all of time and all of the fog that ever was; I’ll make a voice that is like an empty bed beside you all night long, and like an empty house when you open the door, and like trees in autumn with no leaves. A sound like the birds flying south, crying, and a sound like November wind and the sea on the hard, cold shore. I’ll make a sound that’s so alone that no one can miss it, that whoever hears it will weep in their souls, and hearths will seem warmer, and being inside will seem better to all who hear it in the distant towns. I’ll make me a sound and an apparatus and they’ll call it a Fog Horn and whoever hears it will know the sadness of eternity and the briefness of life.”

This morning, in the early hours well before dawn, I was awakened by the haunting sound of fog horns.  I am not sure of how many were participating in this symphony but there were the clear blasts that seemed to come from the water right beneath my bedroom window and others, more distant, whose call seemed to be nothing more than a whisper.  Together, the varying tones were almost constant and created an eerie melody.  As I lay in bed, surrounded by the warmth of home, I was reminded that, although we close our eyes and drift off into sleep, the pace of the universe never stops.  The source of these calls… enormous freighters entering and leaving the San Francisco Bay on ocean travels lasting weeks at a time…were making their presence known to other vessels, namely ferries which would soon begin shuttling commuters across the Bay, whose established routes would criss~cross with these giant ships.  In the darkness, listening to these warning calls, I knew we were in for a foggy morning.

Despite early sunshine overhead, a bank of thick fog blanketed the water.  I took this photo just before leaving the house for school drop off… 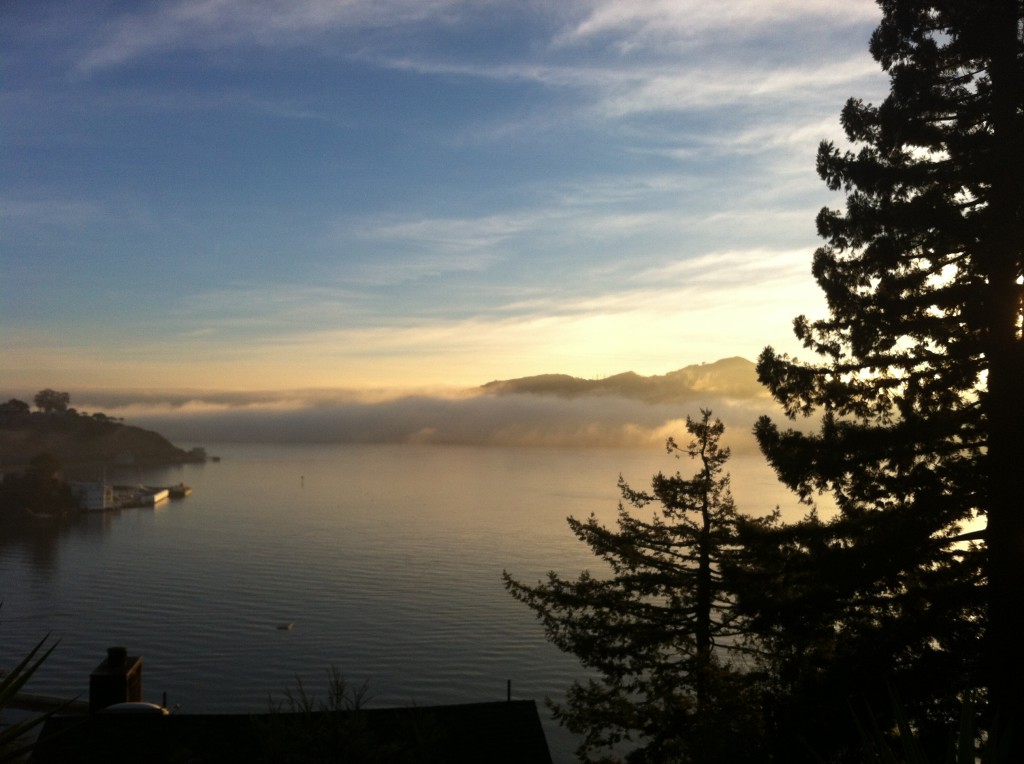 By the time I arrived home, less than thirty minutes later, the fog was overtaking our little cove… 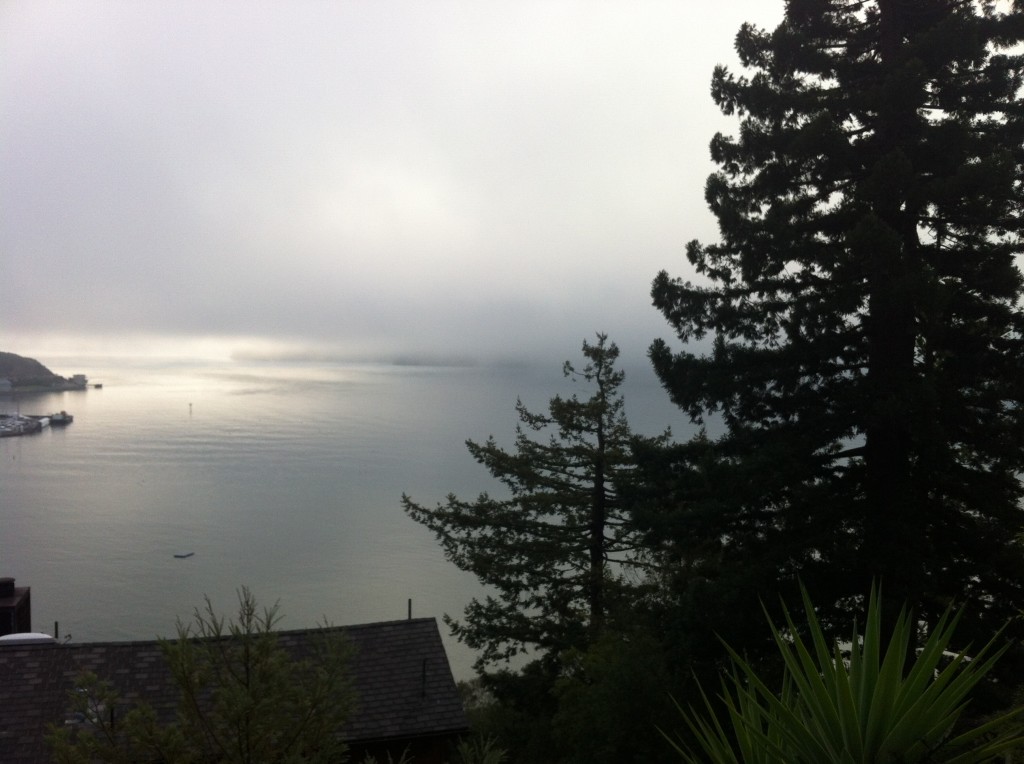 And before I could finish brewing my cup of morning tea, our little corner of the world was completely covered under a cloudy gray blanket… 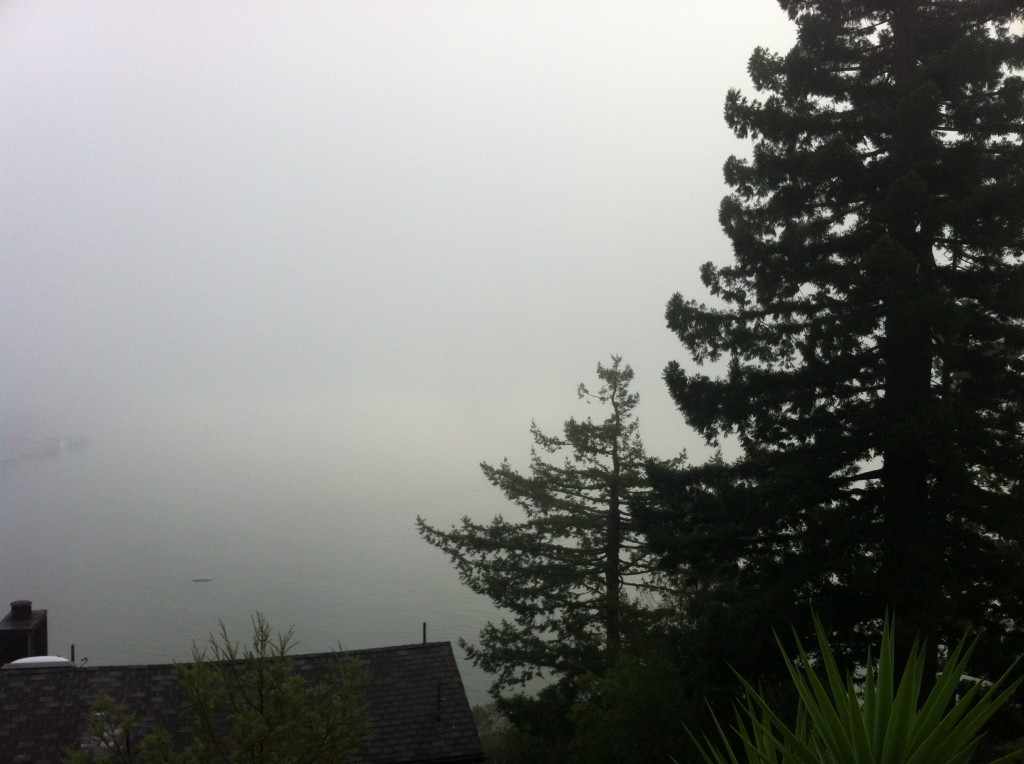 The fog continued to thicken as I prepared the soup we would be having for dinner.  A simple, savory pumpkin soup that takes just minutes to prepare and gently cooks in the slow~cooker for the rest of the day.  Click on the image below to be taken to the recipe in one of my earlier posts. 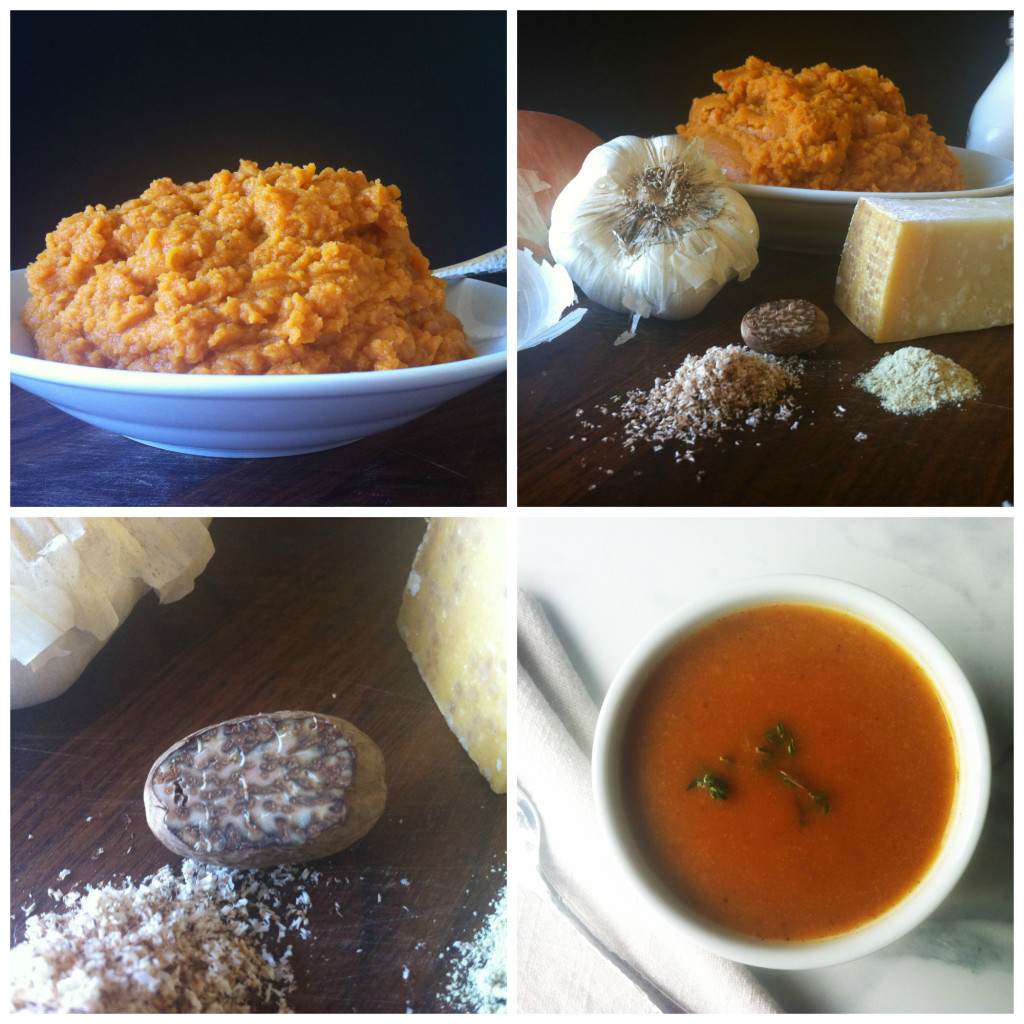 Some type of grilled cheese often accompanies our soups around here but tonight I decided to serve a bruschetta that I had made for a luncheon with friends a couple of months ago when local grapes were at their peak in the Northern California wine country. These toasts which pair sweet, caramelized and salty grapes with cool, creamy ricotta and a kiss of earthy thyme were more than well~received by my guests and a hit with the family this evening. 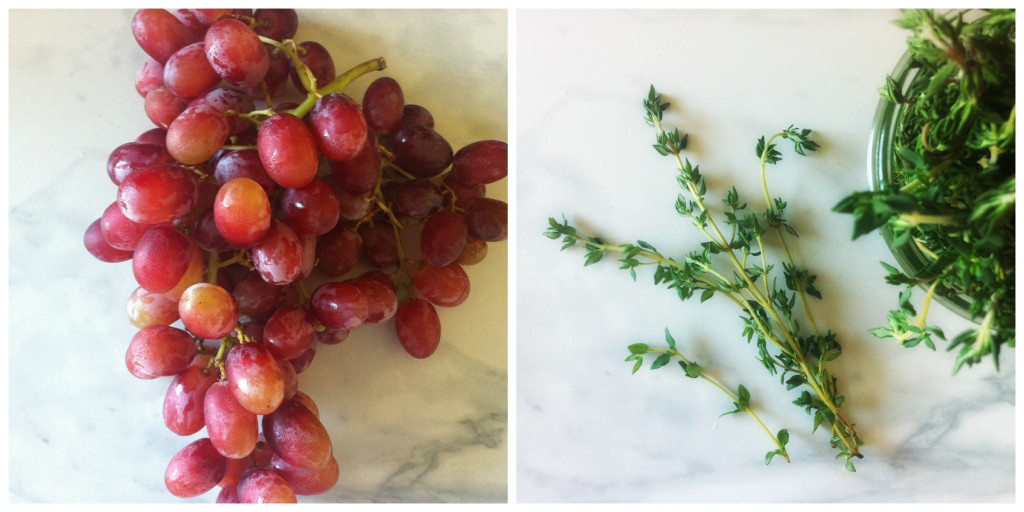 The bruschetta comes together in about 10 minutes.  Once the grapes have been removed from their stems, they are simply tossed with a bit of olive oil and fine~grain sea salt then toasted in the oven with a few sprigs of thyme.  What emerges from the oven are intensely sweet grapes {some of which have burst open} with the essence of thyme… 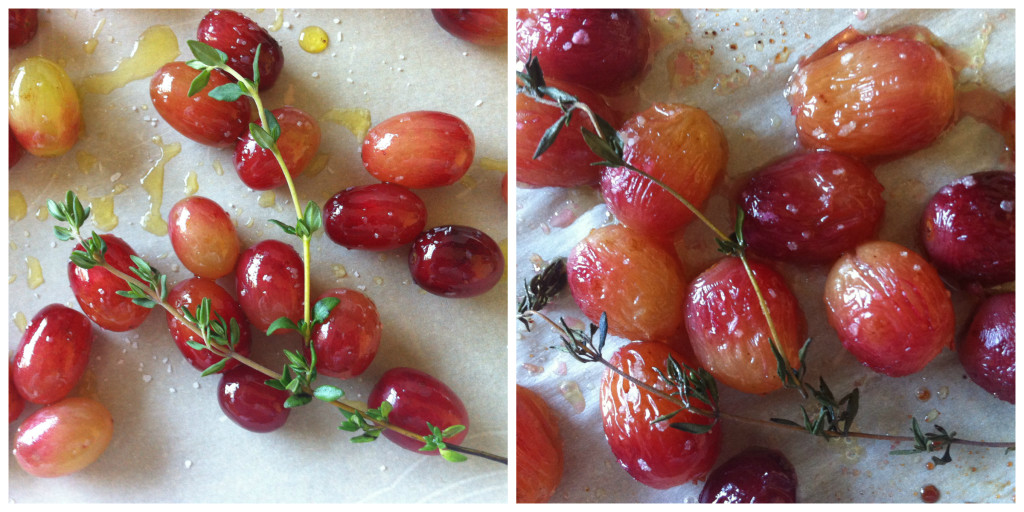 While the grapes roast, slices of rustic bread are brushed with a bit of olive oil and then toasted in a grill pan.  To assemble the toasts spread a bit of fresh ricotta onto the warm bread followed by a few of the caramelized, warm grapes & a bit of freshly cracked pepper.  Enjoy! 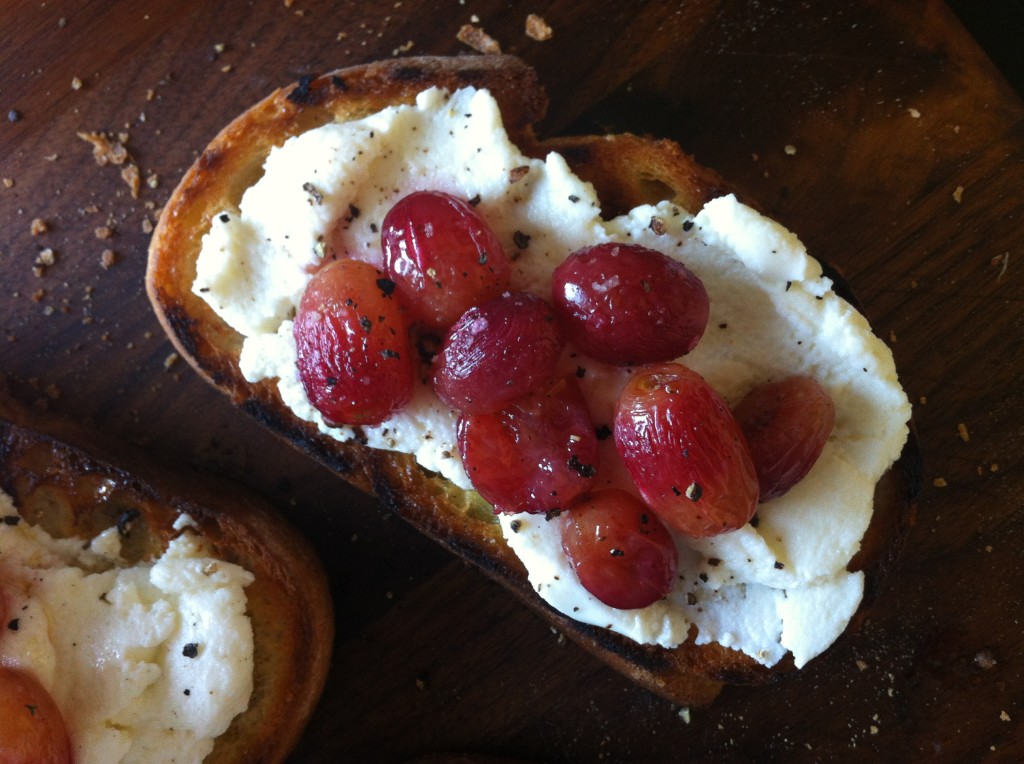 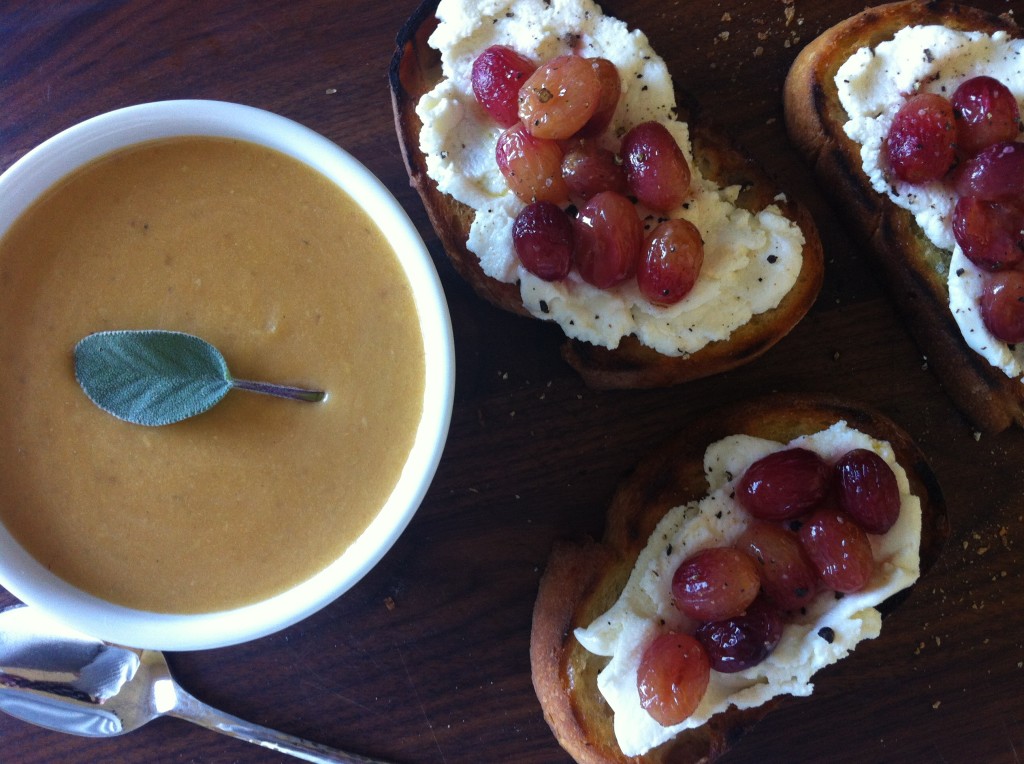